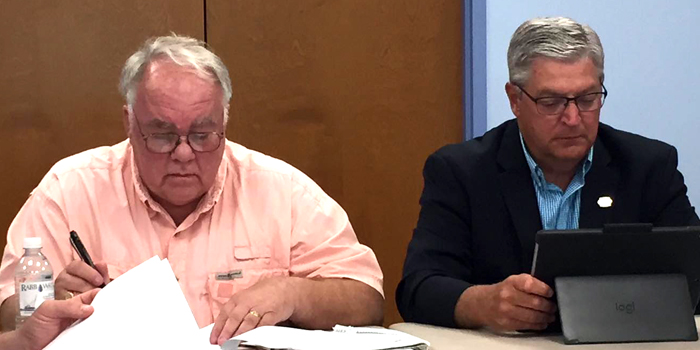 “I went to the public meeting and talked to a lot of residents,” said Thallemer. “It seemed to me that most of the concerns I heard that night were about the speeds on Main Street. The thought was that maybe we should look at those issues first before putting a bike lane on Main Street.”

Thallemer stated he had not heard any real concerns with potentially putting a bike lane on Fort Wayne Street.

“I don’t know if anybody has concerns about Fort Wayne Street, but we thought it might be a way to try it out and get people familiar with it,” said Thallemer.

He explained that traffic counts will be obtained at intersections on Main Street to see if additional stop signs are warranted.

“Someone suggested speed bumps,” said Thallemer. “The biggest issue seems to be that there is a significant amount of traffic and speeding on Main Street. We’re obviously going to look at enforcement and possibly reducing the speed limit.”

“There are four or five things we can look at,” Thallemer continued. “In deference to the concerns raised by residents, I think it’s important that we look at what’s happening on Main Street before we would add this.”

“I know there was a bit of uncertainty about what’s going to happen with the current sidewalk configuration at Lincoln School and a project to improve sidewalks between Main and Clark streets,” Thallemer said. “The idea is getting kids to and from school in a safe manner. It used to be called Safe Routes to School, and the federal government set aside money for those types of improvements. With those monies not being available, we’re trying to do it locally and still improve safety and different modes of transportation to school.”

“Colfax and Clark streets are under construction now,” added City Planner Jeremy Skinner. “The INDOT project is 2022 money so the sidewalk project is a few years away. Obviously the intent was, with building the new school there, to create walkability throughout that neighborhood so that those children can have a safe passage to school. The bike lanes on Main and Fort Wayne and the sidewalk improvements would be a part of that.”

“I think the expectation is that we will go ahead and do Fort Wayne Street and see how that goes,” said Thallemer, who clarified that this will not eliminate any parking.

“In terms of speed, bike lanes on Main Street would actually help reduce the speed because you would be narrowing the road view,” said Skinner. “Right now, part of the issue with Main and Fort Wayne is that it went to a one way, but it’s practically wide enough for two way traffic.”

“Justin [Taylor] has put a lot of work into this and I certainly appreciate what he’s done,” said Thallemer.

Next on the agenda was discussion about installing a ‘No Parking’ sign on East Tyner Street.

“What has happened is that the street is narrow and it dead ends where construction is going on,” said Warsaw Traffic Safety Commission President Steve Foster. “Folks are building a new house, and people are parking right there so these folks can’t get in and out of their driveway. People are using it as a place to park and then cutting through the woods.”

It was suggested that people are parking in that area and then using a city easement and crossing the railroad tracks to get to Eagle Creek to fish.

“Most of the streets in that neighborhood are between 20 and 22 feet wide — and  you need a minimum of 26 feet to have on-street parking,” said Skinner.

It was decided that a ‘No Parking’ sign will be placed on East Tyner Street.

Updates on railroad construction were discussed. Mayor Thallemer informed the traffic commission members that in the next week or two, the railroad on Hickory Street will be asphalted, and that Levi Lee Road was opened up today.

“I want to publicly thank the police, fire and street departments, my assistant and the mayor’s office for everything you guys did during the railroad construction,” said Thallemer. “It was a madhouse – we knew it was going to be a madhouse and you guys were great.”

“Norfolk Southern did a great job of communicating,” Thallemer continued. “Chief Wilson and his guys helped out. They hosed down asphalt to cool it off so we could open some of the intersections sooner.”

“We’re not completely out of the woods yet,” said Thallemer. “They’ll be back in the fall to put the new crossings in, but I don’t think it’ll impact the way this one did.”

Skinner stated that two bids have been received on the Market Street project.

“Hopefully we’ll start construction there yet this year,” said Skinner. “Buffalo Street construction will be going on through November.”

Thallemer then mentioned the sewer replacement project. “They’re getting ready to start the lining – there won’t be road closures so much as lane restrictions because the trucks that line the pipe will have to access the pipes at the manholes,” Thallemer explained, “So probably one side or the other will be restricted during that process.”