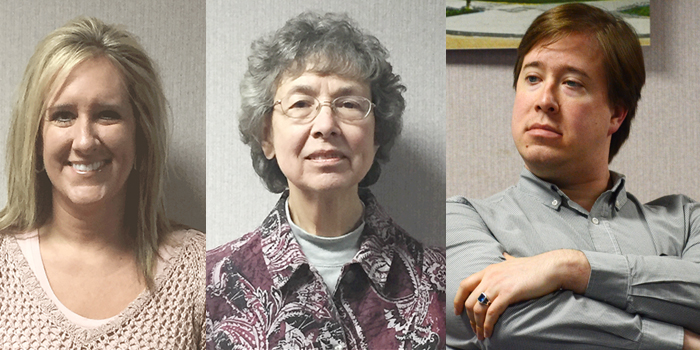 From left are Sherri Dalyrmple, Paulette Sauders and Tim Keyes.

During her monthly presentation to the board, Library Director Ann Zydek told the panel that one of the two soon-to-be vacated spots had been filled through action by county government last month.

“We have been trying to replace two of our library board members as their commitments have come up as of June 30 and the county commissioners, at their May 29 meeting, did appoint Tim Keyes to serve on the library board at that time,” Zydek said. “So, he’s a guest here today.”

Departing the board are Paulette Sauders and Sherri Dalyrmple.

During her presentation with the board, Zydek told the outgoing board members that bricks would be installed on the library grounds to commemorate their years of service to the board.

Sauders began serving on the board on June 30, 2002. “During her four terms, she faithfully and impartially discharged the duties and responsibilities of a library board trustee, including the position of secretary of the library board for many years,” said Zydek.

Dalyrmple served on the board for eight years beginning in June of 2010. During her tenure she served as treasurer. Zydek pointed out that both outgoing board members served on the panel during numerous noteworthy changes to the library as well as during the library’s centennial.

“I would like to thank both of you and at some future point, Robin (Fosnaugh) will let you know to come out and look but there will be something like this to represent your terms of service.”

In other business, the library board approved the hiring of law firm Rockhill-Pinnick at the legal representative for the facility. The law firm agreed to waive the proposed retainer in favor of a $200 per hour fee as needed.