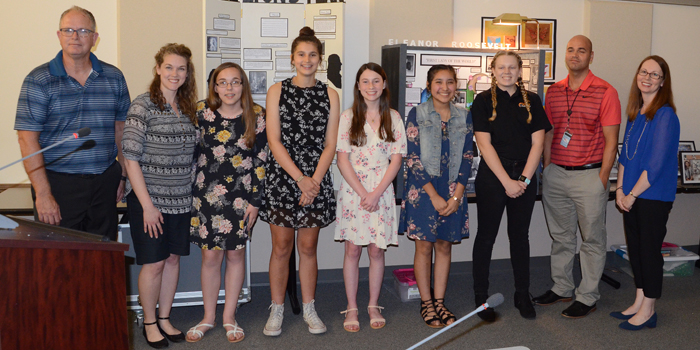 WARSAW — Warsaw Community School Corporation celebrated both student achievement and staff accomplishments during a nearly two-hour-long regular session of the Board of School Trustees Monday night, May 21.

In a board meeting chockfull of accolades pouring down on faculty and students alike, the board room was standing room only as those recognized were lauded for achievements at the state and national level, as well as for years of service. 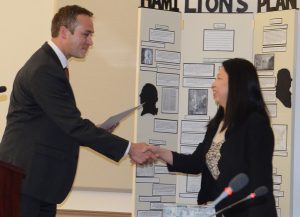 Dr. Shu-Chun Tseng
Superintendent Dr. David Hoffert acknowledged the corporation’s Dr. Tseng for her accomplishments in language arts. “She was selected as the teacher of the year at the secondary level of Chinese language by the Chinese Language Teacher’s Association of Indiana,” said Hoffert.

“We wanted to spend a small moment here to express our gratitude for the work that you do with the students in our Chinese program here at Warsaw Community Schools and so congratulations and thanks for all you do.”

Longtime bus drivers recognized
Warsaw’s Director of Transportation Mark Fick called up five bus drivers who were awarded for their years of service.

“How many of you remember your bus drivers when you were kids?” said Fick. “These women right here are 25 to 31 years driving for Warsaw Community Schools. It is something they’ve even doing for a long time. They are now driving the grandchildren of children that they drove, and it is remarkable.” 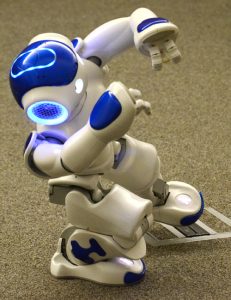 Rowdy the Robot dances for the school board.

Board Spotlight — Edgewood Middle School
Edgewood Middle School Principal JoElla Smith introduced Abbi Richcreek, the school’s Project Lead the Way teacher. “She’s proven herself to be creative and resourceful,” said Smith. “She helped to write a Dekko grant and we were awarded funds to purchase the two humanoid robots for both middle schools.”

Richcreek introduced seventh graders Milana Whitaker and Owen Stevens, who programmed a robot named Rowdy to do such human-like tasks as kicking a soccer ball, practicing tai chi and riding a small horse. The two students, along with the hyper-verbal robot have been featured on television news and the horse-riding project has the students in consideration for a spot in the Guinness Book of World Records.

The students told the board they enjoyed programming Rowdy but admitted it was a challenge at times.

“My favorite thing about programming is that you can change the path and that you can make your own program and you don’t have to follow the rules and you can make whatever you want,” said Whitaker. “After high school I’d like to go to college and be an engineer.”

Stevens told the board that sometimes, programming provided challenges. He said he is currently torn between possible career fields. “I’m trying to decide whether to be a pilot or a programmer,” he said.

“This is a huge and incredible honor for Warsaw Community Schools to have students competing at this national level,” said Hoffert of Lakeview’s team. “National History Day is at the same level of the National Spelling Bee and some of the other academic competitions we see on ESPN.”

The Lakeview students, Abigail Rahn, Hannah Shapiro, Elena Sullivan, Kaylee Ochoa and Rachel Doyle created presentations on Alexander Hamilton and Eleanor Roosevelt, which were on display in the board room.

“All of our eighth graders participated this year and it was group exhibits on any American history,” said Amanda Scroggs, Lakeview librarian. “It was truly a collaborative effort,” said Lakeview’s Todd Braddock. “We’re here to see all these young people at Lakeview Middle School shine tonight and that’s what it’s all about at the end of the day. These kids were able to do remarkable things and we’re proud of them.”

Braddock’s comments were mirrored by Betsey Vastbinder, who also helped mentor the participants. “When you look at really good school projects, you end up wondering how much of it was done by a parent,” she said. “Those boards were constructed by these girls’ hands. This is all their work. They are expert level researchers at this point. They are out-researching some of the colleagues I went to college with. I am very impressed with the level of work.”

The National History Day contest is scheduled for June 10-14 at the University of Maryland in College Park, Md.

Following the presentation, the students told the board they had been doing reenactments for some time and have done skits on other historical events such as the battle of the Alamo and Pearl Harbor. 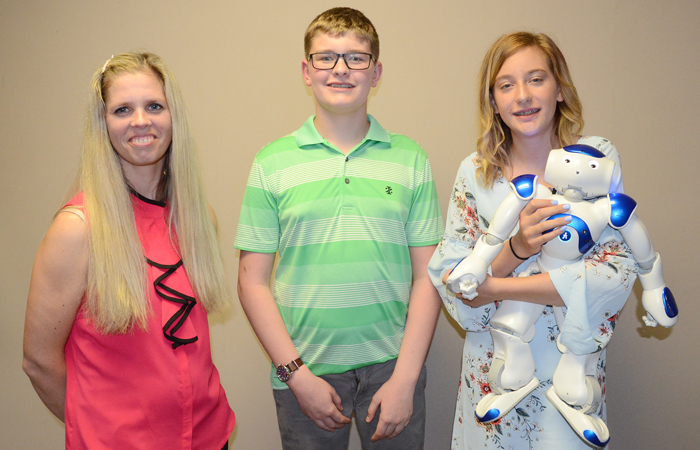 From left are Project Lead the Way teacher Abbi Richcreek, Owen Stevens and Milana Whitaker with Rowdy the Robot. 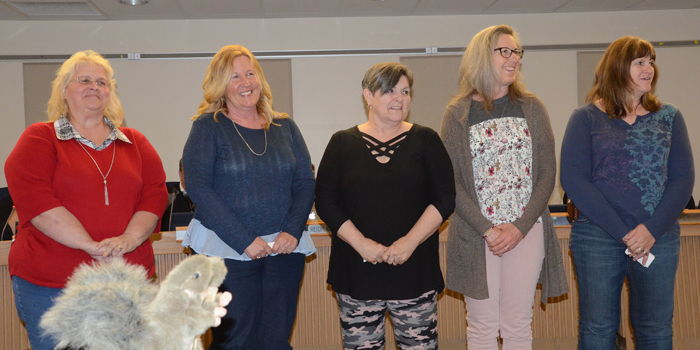 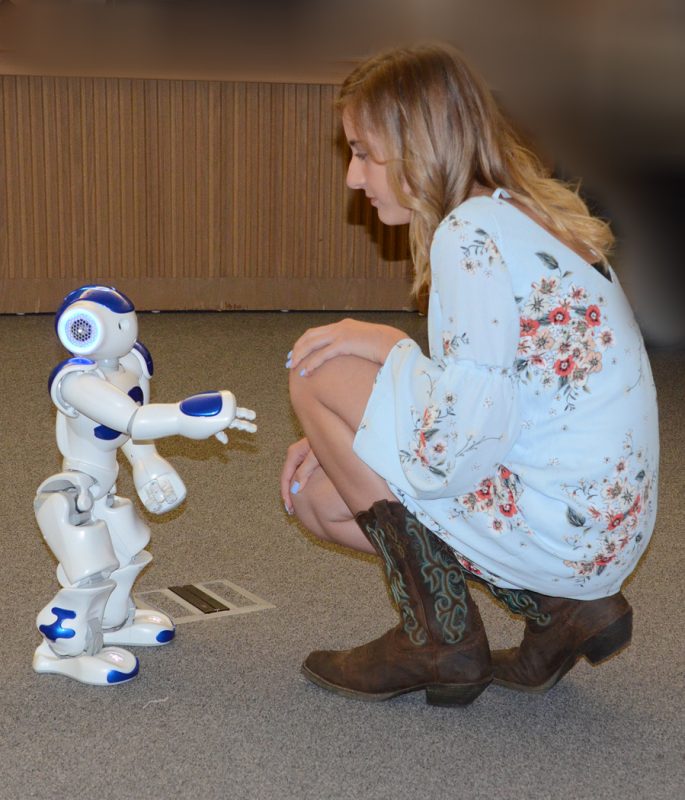 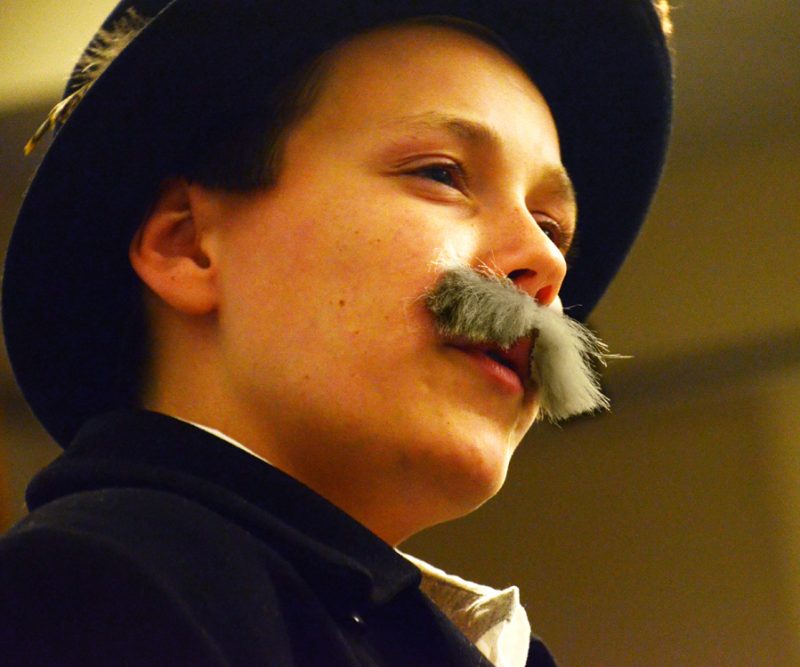