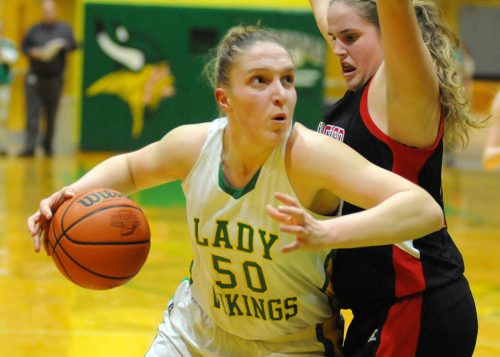 Anne Secrest knew that she had to follow her heart.

That heart has the former Tippecanoe Valley basketball star headed back to the Hoosier State.

Secrest has decided to transfer from Youngstown State University to Indiana Wesleyan University. She announced her decision Tuesday night via her Twitter account.

The main reason for Secrest’s decision was quite simple.

“I missed being around my family and having their support,” said Secrest in a phone interview Wednesday morning. “I realized that it was a lot farther away than I thought.

“I’m thankful for the opportunity that I had here. But this is the best decision for me and my family.

“I’m so excited to be coming back closer to home to play at IWU. I can’t wait to have the support of my family and friends again. Nothing can top the support that you get from home.”

Secrest, as humble and classy as they come, is sure to see plenty of familiar faces next season when she suits up for IWU. The Wildcats campus in Marion is just an hour from home and they play in the Crossroads League, which also includes Grace, Goshen, Bethel, Saint Francis and Huntington.

Secrest played in all 32 games her freshman year at Youngstown State, which is five hours away from home in Ohio. She made 17 starts and averaged 10.7 minutes of playing time per game. Secrest averaged 2.3 points-per-game as the Penguins finished 16-16 overall and 11-7 in the Horizon League.

Secrest took a visit to IWU last Friday. She will be reunited there with former Valley teammate Meredith Brouyette. Brouyette, along with former Warsaw star Dayton Groninger, just finished her freshman season for the Wildcats.

“I’m so excited to be teammates with Meredith again,” said Secrest. “We kept in touch all season and she loves IWU.

“I just felt like God has spoken to me and I needed to follow my heart and do what he wants me to do. IWU is the best place for me. I love the coaching staff there. They have a sense of family and a great winning tradition too. It’s a faith-based program where I can grow in my faith.”

Secrest had a prolific prep career at Valley. She led the Vikings to an 85-17 mark in her brilliant four year career with three Three Rivers Conference and three Class 3-A sectional championships. Secrest averaged 17 points and 10 rebounds per game as a sophomore during the 2014-15 season when the Vikings went 25-3 and finished as Class 3-A state runner-up. She finished her career as Valley’s all-time leading scorer on the ladies’ side with 1,580 points.

Secrest earned Ink Free News Player of the Year honors as both a sophomore and a junior in 2015 and 2016, the first two years for the award. She was also a first-team pick to the team following a senior season in which she averaged 15 points and seven rebounds per game. She helped coach Chris Kindig’s team win 28 straight TRC games during her career in Akron.

“I loved the Division I experience,” noted Secrest of her season at Youngstown State. “I loved the competition and was thankful to be part of it. But it was time to move on and find the right fit and that’s at IWU for me.”

Secrest is the daughter of Mike and MaryAnn and has a pair of older brothers in Thomas and John Paul. She plans to attend May term at IWU.

“I think that being at IWU for May term will be a good thing,” stated Secrest. “I can get to know the coaches and players better and get a taste of the school.”

Secrest joins a program that is known for success. The Wildcats finished 25-9 this past season and lost in the Round of 16 in the NAIA Division II National Championships. Ethan Whaley, a former assistant coach with the IWU men’s program, just finished his first season as the women’s coach at the Crossroads League school. The Wildcats, who were ranked No. 17 in the final poll, went 15-3 in conference play to finish in second place behind league champion Marian.

IWU will lose a pair of seniors from this year’s team, including Anna Imhoff. The guard was an honorable mention All-American selection following the season.

“My goal is to just go in and help out the team as much as I can and grow with my teammates,” remarked Secrest. “My goal is to win a national championship at IWU.