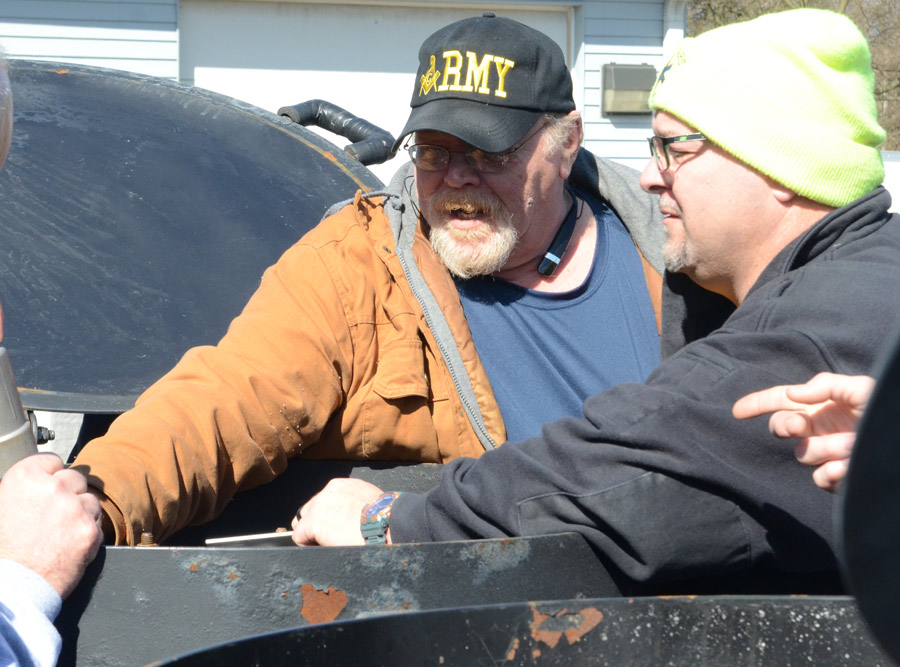 Participants in the rail car incident response for crude, ethanol and other flammable liquids training had an opportunity to take a rail car simulator walk-around. The simulator — a small tank car, allowed participants to see the A and B end of a train, along with a look at the devices inside the protective housing at the top of a pressure tank car and general service car.
Shown are Turkey Creek Fire Territory Fire Fighter Larry Weaver Jr., and New Paris Firefighter Bill Dunlap inspecting the tank car fittings. (Photos by Deb Patterson)

SYRACUSE — A train derails. The train is a freight train, carrying different products on different cars. It is unclear what cars have derailed.

Were they all box cars? Were there tank cars? Did the locomotive derail as well? Numerous other questions arise, including what is in the cars that derailed.

Unlike battling a house fire, where firefighters quickly pull the hoses from the trucks and begin pouring water on the blaze, a train derailment calls for gathering of information before any action is taken.

For many of these firefighters it was continuing education and a refresher course. But there were others attending as well from Lilly Center for Lake and Streams, city of Warsaw Storm Water, Wawasee Property Owners Association and private citizens, who learned a wealth of information and received a better understanding of rail car incidents, along with the makeup of trains and the cars they haul.

The day was broken down into seven sections: introduction and course overview, introduction to rail car emergency response, train composition and rail car design, hazardous materials recognition and identification, characteristics of chemicals and toxicology, rail tank care response and of course some testing. 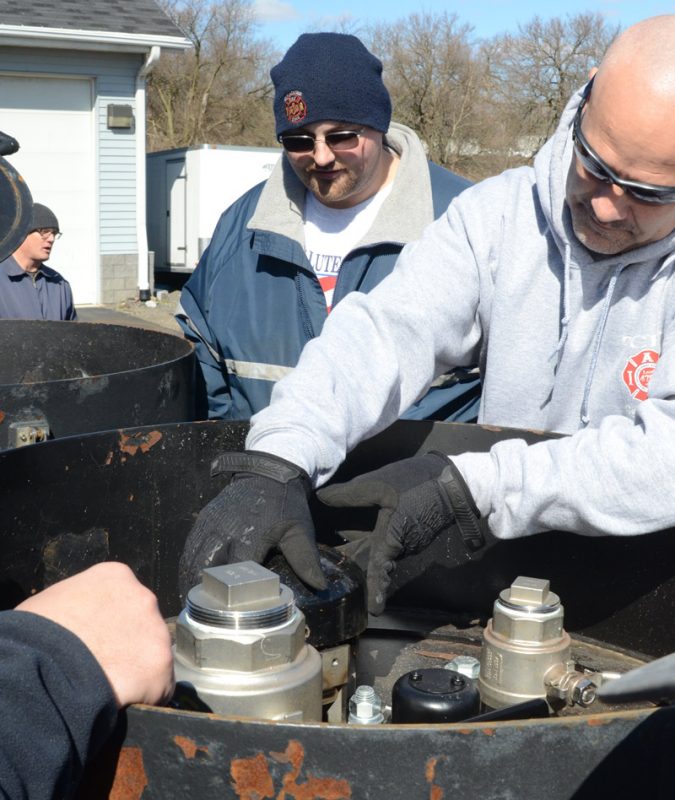 Turkey Creek Firefighters Sean Manges and Brian Richcreek getting a closer look at the tank car fittings inside the protective housing on top of a general rail car.

The training touched on the strategy of decide, estimate, choose, identify, do and evaluate or the D.E.C.I.D.E process for making emergency response decisions. Additionally an overview of the rail/freight industry was provided, including the major rail lines in the United States and Indiana along with the commodities shipped by rail. A binder with contacts and information was given to each participant along with DOT Chart 16 for hazardous materials markings, labeling and placarding guide.

For many, the interesting part of the training came with the train composition and rail car design — including how to tell the difference between a general service tank car and pressure tank cars, fittings and where to find specification markings. Each person learned about the various rail car designs and aspects of the construction, products transported, fittings and accessories, train composition and interpreting rail car identification markings and configurations for general service cars, pressure cars and locomotives. Even the language used in the rail car business was presented.

The real learning came with the hazardous materials recognition and identification. Understanding of the U.S. Department of Transportation marking, labeling and placarding system was learned, along with the UN Hazard classification system, and identification of critical information regarding hazardous materials by using the Emergency Response Guidebook. Participants also were taught how to read a trains consist or shipping papers. This consist provides necessary information including a hazardous material key, the position of cars in the trail, types, contents, destination, DOT hazard class, shipping name, DOT ID number and packing group.

The main point of the training was training firefighters how rail car incidents should be approached — finding out the hazards to human life first and foremost, before taking further steps. There was group participation in recognizing hazards at scenes utilizing photographs from prior rail car incidents, including the potential of a boiling, liquid, expanding, vapor explosion and a heat induced tear.