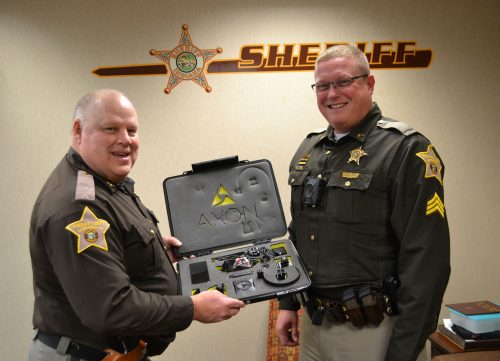 Kosciusko County Sheriff Rocky Goshert and Sgt. Jon Tyler show off one of the Axon body cam test kits. Tyler is actually wearing a body cam on the front of his uniform.

WARSAW — Kosciusko County Sheriff’s Department began testing body cams Jan. 5. But have you ever wondered just how a law enforcement agency “tests” new equipment to determine what to purchase?

Capt. Chris McKeand said there are a host of factors. Currently deputies are testing body cam systems from Axon and Digital Ally.

Both companies sent the departments several kits with different variations of cameras for officers to try and see what they like. The department is also addressing the feasibility of having the equipment in the field.

Originally McKeand said he was against the department purchasing body cams. Then last summer an incident occurred where an accusation was made against a deputy. However, body cam video from an officer with another department, clearly showed the deputy was not at fault in the incident. He said the body cams do offer another layer of officer safety.

“We’re thinking of doing five or six this year,” McKeand said. “The only problem is it isn’t cheap, so you’re trying to fit dash cams and body cams into your budget.”

The Digital Ally system allows the body cam to link up with the officer’s dash camera and video from both can be automatically downloaded wirelessly and stored when an officer comes back to the sheriff’s department.

The Axon system would have a docking station in the squad room were officers would have to download their videos when they come off shift. McKeand explained the question becomes does the department purchase a system because it offers use of ease to the officer or for the administration.

Another concern is the battery charge on the camera. “When we first started testing we’re on 12 hour shifts, battery use was an issue, “ McKeand said explaining the camera batteries were only lasting about eight hours before needing to be recharged. At the time, the cameras ran with the dash cam, but having the officers turn the camera on as they exit their vehicle provided a solution to the problem.

Storing all the video is another huge cost and each law enforcement agency does it differently. Currently the sheriff’s department stores dash cam videos and a back up on its own servers. Both Axon and Digital Ally want the department to use cloud based storage. McKeand said this raises some issues with the administrative staff because the video can be used at a trial and there are concerns of the cloud being hacked.

An Axon body cam test case offers a pair of safety glasses, two cameras, several mounts for the cameras, safety glasses where a camera could be mounted, too, and what looks like a small cellphone which is a video player the officers can use to watch the video they just took. Officers quickly realized they didn’t like the safety glasses, which McKeand suggested may be used by the S.W.A.T team and a camera meant to be clipped to their uniform at the shoulder.

Most of the officers who have road tested the body cams like the camera they wear on their chest by Axon.
Regardless of which system the sheriff’s department decides to use, the plan is to implement five or six and assign them to officers who will receive new cars in the fleet rotation due to take place sometime in May. There is also talk of implementing body cams in the jail and with some of the detectives on the department.