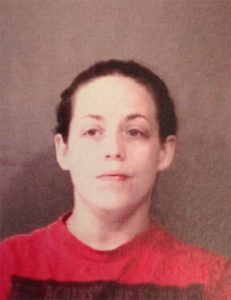 KOSCIUSKO — A Michigan woman was arrested for stealing items out of storage units after cutting locks off of them.

On Oct. 7, an officer with Ligonier police conducted a traffic stop and identified the occupants as Swinehart and Andrew Futymoski, 28, 10635 W. West Avenue, Schoolcraft, Mich. According to the affidavit of probable cause, Swinehart and Futymoski admitted to stealing property from Kosciusko storage units. The officer found a Reck P8 .25 caliber handgun and bolt cutters.

The affidavit states that on Oct. 10, Kosciusko County Sheriff’s Department responded to a burglary, theft and criminal mischief at Packrat Storage. The victim at the scene advised the lock on her storage had been cut but no items were missing. According to the affidavit, the officer then discovered that locks had been cut from multiple storage units.

The officer was able to identify victims who had locks cut off of their storage units. Four victims advised officers of missing items.

Victim A reported he had a toy antique fire truck, a Bible with his name on it and miscellaneous documents stolen. The Bible and documents were found in the vehicle.

Victim B had a bag of jewelery, two Brinks fire safes and miscellaneous paperwork stolen. All items were reported as located in the vehicle.

Victim D had a 6-HP Evinrude boat motor and fishing tackle stolen. Both items were found in the vehicle.

According to the affidavit, when the officer spoke to Futymoski he admitted that Swinehart and he cut off locks and entered the storage units at Packrat Storage on Oct. 6.

Swinhart was booked into Kosciusko County Jail on Dec. 29 with $11,000 surety and cash bond. A warrant was issued for Futymoski’s arrest on Nov. 21.