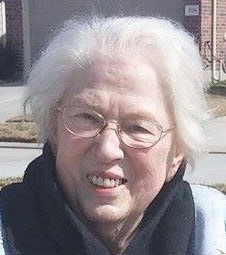 Barbara Doty (Shelton) Purrington, passed away at 3 a.m., Christmas Eve, Dec. 24, 2017. She passed peacefully in the loving care of the staff at Conroe Health Care Center, Conroe, Texas, where she has been a resident for three years. She was 88.

She was born in Warsaw, March 6, 1929, to Russell and Elizabeth (Oborn) Doty. Three sisters have preceded her in death. She was raised primarily in Pendleton, in the red brick house on “The Popcorn Farm.” Her father sold popcorn under the brand name of “Big Noisy,.”

Barbara graduated from Pendleton High School, Pendleton in 1947. She attended Ball State University, Muncie. She retired in 1992 from Dalton Foundries as an Executive Secretary. She was initiated into Kappa, Kappa, Kappa, on June 5, 1947, by Gamma Pi, Chapter in Pendleton. She was installed on Aug. 26, 1967, as a Warsaw Associate, Warsaw. She was a woman of many talents: pianist, professional style dressmaker, reweaver of fabric, crafter, poet, to name a few. She was a very creative soul.

She is survived by: Jeffrey J. (Cindy) Shelton, Warsaw; Cynthia B. (Terrence) Walsh, Conroe, Texas; Edwin S. (Shirley) Purrington, Fort Worth, Texas; James P. (Sandra) Purrington, Whitmore Lake, Mich.; and Franklin L. Purrington, Dearborn Heights, Mich.; along with 12 grandchildren and 21 great grandchildren. She has many family members and friends whom she loved and loved her.

A “Memorial Gathering” is being planned for the spring of 2018. The memorial date, location and time will be announced at a later date. McHatton-Sadler Funeral Chapel, Warsaw is entrusted with arrangements.

To sign the guest register or leave condolences electronically, go to mchattonsadlerfuneralchap