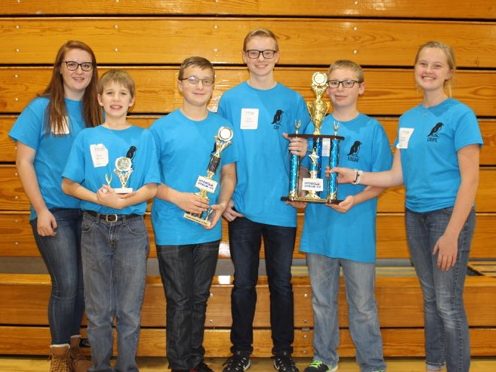 From left are Jossie Coy, Clay Coblentz, David Anderson, Connor Coy, Colten Edgar and Taylor Cripe. They make up the Water Warriors robotics team at Wawasee Middle School who were the grand champions at the robotics qualifier in November and will compete in the state tournament in Fort Wayne.

Also qualifying for the state tournament is a homeschooled team from the Milford area known as the Wookiees, which placed third at the qualifier. Coached by Ann Schlabach and Stacey Yoder, Wookiees team members are Brian and Dylan Schlabach, Samuel and Sawyer Yoder and Aaron and Samantha Kemper. They will also be competing for the Global Innovation Award during the state tournament and were one of only four robotics teams from northern Indiana selected to compete for this award. A separate panel will judge the competitors for this award.

Water Warriors made up of Jossie Coy, Connor Coy, Colten Edgar, David Anderson, Clay Coblentz and Taylor Cripe was the grand champion team at the qualifier and placed first in robotics performance and first in the judges award.

There were 15 teams at the WMS qualifier including the five from WMS, three from Milford, one from Syracuse Elementary, four from Whitko Middle School, one from Fremont Middle School and the home schooled team from the Milford area.

Because of the large number of 42 students in the after school robotics program at WMS, the school held its own tournament to narrow down the number of teams from eight to five to compete in the qualifier. The three teams qualifying for the state is the highest number ever sent to the state from WMS.

Ryan Edgar is the robotics coach for WMS. 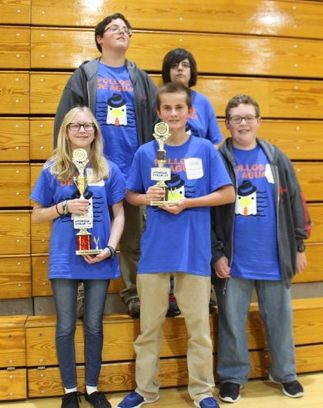 Pollos de Aqua qualified for the state tournament. Team members are, in front from left, Leslie Wheat, Leo Wrage and Hudson Bonner. In the back row are Nik Tennant and Jesse Requejo. Not pictured is Cadin Gall. 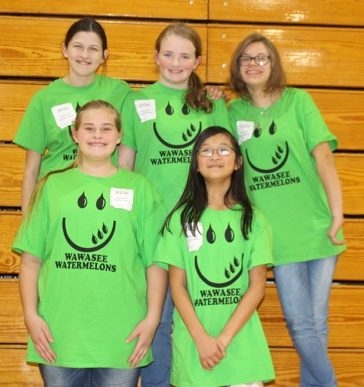 Wawasee Watermelons qualified for the state tournament. Team members are, in front from left, Riley Reynolds and Sydni Ewing. In the back row are Kaley Kuhanek, Allison Stookey and Sevilla LaBarbara.