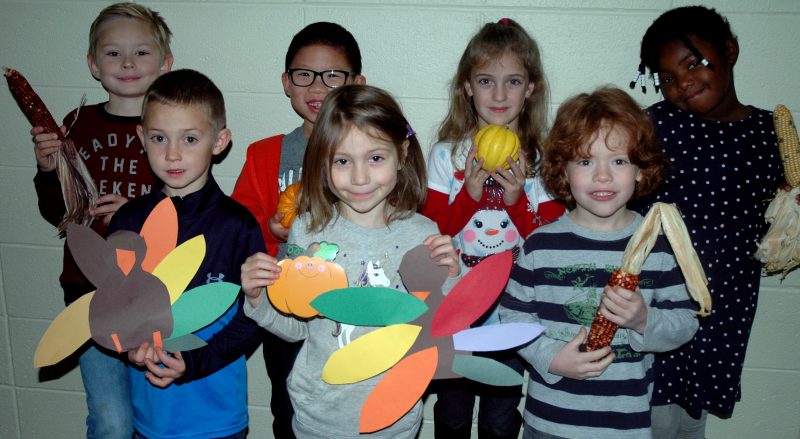 A septet of students from Warsaw Christian School pose with their Thanksgiving memorabilia. Pictured are, front row from left, Barrett Polk, 6, son of Jeff and Christy Polk; Lilianna Sumpter, 6, daughter of David and Rachael Sumpter; and Jaxon Kimes, 6, son of Eric and Kara Kimes. Back row: Ethan Danko, 7, son of Allen and Agnie Danko; Owen Hoyt, 7, son of Jeff and Denise Hoyt; Freya Wessels, 6, daughter of Nathan and Susan Wessels; and Emery Zielasko, 7, daughter of Tyler and Kari Zielasko. (Photo by Ray Balogh)

WARSAW — As with any assemblage of savvy historians, the collective wisdom of seven students at Warsaw Christian School yielded a perspective on Thanksgiving somewhat different from the traditional version most have come to know.

Their collaborative narrative revealed the first Thanksgiving went something like this:

The first dinner between the Indians and pilgrims took place in the undetermined past.

Barrett reckoned the event took place 20 years ago. Other dates hovered near the century mark, with estimates of 101, 102 and 105 years. Jaxon ventured a guess of 155 years.

The pilgrims traveled overseas from either India or Africa. Or, according to Freya, they arrived from Indiana. Ethan figured they made the trip from Pennsylvania.

The first dinner was variously populated.

According to Ethan, the Indian and pilgrim contingents were equal at 60 apiece. Freya thought the pilgrims slightly outnumbered the native population, 60 to 50.

According to Emery, about 200 pilgrims joined 60,000 Indians around the feast table. Lilianna reckoned there were “167 and eight Indians and six pilgrims.”

The menu back then was similar to that served nowadays: turkey, bread, mashed potatoes and gravy, corn and pumpkin pie. Owen insisted they had lettuce as well. Barrett rejected the idea the Indians and pilgrims had turkey. “They only ate deer,” he said.

They acquired the various food items from hunting, reaping from the fields and from their barns. Lilianna said they got the food at the store and Jaxon opined they scored some sweet deals at a garage sale.

Cooking instructions varied greatly, with suggestions the turkey was cooked over a fire, on a stove or in the oven.

Apparently, roasting the bird was a significantly shorter process than it is now. Jaxon estimated the cook time over an open flame at 15 minutes. Emery said the turkey was cooked for 25 minutes with the oven set on “hot.”

“I don’t think they had ovens or stoves or grills,” surmised Ethan, who recommended cooking the turkey on a campfire at 35 degrees for 25 minutes.

Freya’s cook time estimate was the longest, at 35 to 60 minutes over an open flame. She figured the corn was cooked in a pot over a fire for 16 minutes.

Each youngster had his or her own favorite memories of Thanksgiving.

Owen’s favorite was “because you get to eat.” Emery was a little more specific, citing turkey, mashed potatoes and pumpkin pie.

Lilianna shared the same preferred menu. Recalling her earlier childhood, she said, “When I was a baby I ate turkey and mashed potatoes and corn.” How long ago was that? “About 60 days.”

All historical perambulations aside, when asked the true meaning of Thanksgiving, out of the mouths of these babes came pearls of simple, unadorned wisdom.

“I give thanks the most for the time that you get together,” said Freya.

Barrett was grateful “our friends can come over and we can play with them.”

Ethan said, “What I like about Thanksgiving is the time where you get to spend it with family and friends.”

Owen’s parting words of advice were, “Pray to God,” and Barrett advised, “You should love one another.”

Freya suggested capturing the spirit of the holiday by “giving thanks to everybody you see.”