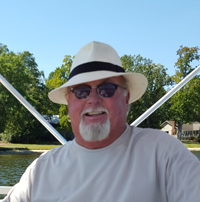 Gary Eugene Oradat, 72, also known as “Big O” to many friends, passed away Monday, Nov. 13, 2017, from a 20 month’s courageous battle with Pancreatic Cancer.

The love of his life, Linda Sue (Pressler) survives. They were married 54 years and had a very full life together. Family meant everything to Gary and he showed that to his three daughters LoriAnn Maynard (Brian), Kimberley Sue Himelick, and Stacey Lynn Carmichael (Bryan), by providing them with a beautiful carefree life.  He was also blessed with two amazing grandsons, Tyler Himelick (Ashley) and Maximilian Lima.

He was incredibly proud of both of them and was always encouraging and supportive in every way.  It gave him great joy to spend time with all of them at their family dream home on Lake Sechrist. He also cherished his Golden Retrievers Rascal, Murphy and Maggie!

Gary also enjoyed NASCAR and most sporting events.  He loved riding his motorcycles over the years and travelling with Linda to so many fabulous destinations in their motor coach “Olivia”.

Gary and Linda started Oradat Builders Inc. in 1978 and later added The House Doctors of Marion.  He was proud of the many beautiful homes and neighborhoods they developed for old and new friends alike.  He retired from the Marion Fire Department as Assistant Chief and was one of the original founding members of the Dive Water Rescue team. He was humbled by the experience to be a civil servant to the city of Marion for over 20 years.  He and his brother Larry Oradat co-owned Erma’s Restaurant from 1981-1987, as well as, Erma’s Pantry’s and Stronghold Storage.  He was a self-made man and no stranger to hard work.

He is preceded in death by his parents Jack and Mauldrid (Walthall) Oradat, father-in-law Robert Pressler, grandparents Walter and Amelia Oradat and Telfer and Lura Walthall.

The family will hold a private memorial service. A celebration of life will be held in the spring at the family lake home.  Date to be announced later.