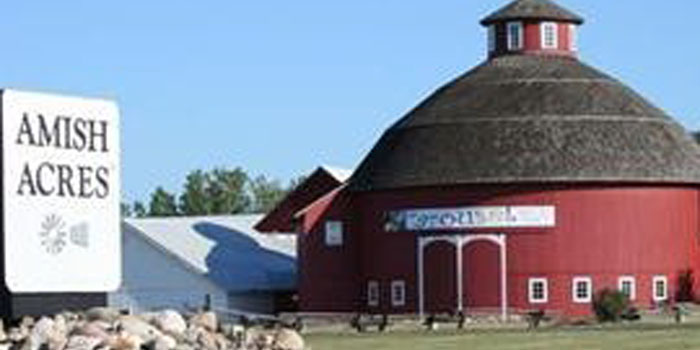 NAPPANEE — If you have ever read an Agatha Christie mystery, you will love “The Mousetrap,” now on stage at Amish Acres Round Barn Theatre in Nappanee through Nov. 5.

It is the story of complete strangers trapped during a snowstorm at Monkswell Manor.

Someone is murdered and the address of Monkswell Manor is found at the crime scene along with a note depicting “Three Blind Mice.” It is felt the note means two at Monkswell Manor might be candidates for murder.

The second murder takes place at the manor in spite of the fact Detective Sergeant Trotter is there to protect those who are trapped because of the snowstorm. All set about trying to find out who the killer is. Can they prevent a third person from being murdered? The snow is high and the telephone line has been cut. They have no means of escaping or contacting anyone for help.

Most in the audience know who the killer is. Or do they? Evidence points to one person and then to another and then another. It gets complicated as the audience tries to stay one step ahead of those on stage.

Katherine Barnes is Mrs. Boyle — a snooty old woman who isn’t satisfied with anything. She is a former judge who becomes the second murder victim. While she’s not seen in the second act, Barnes lends her expertise to the production.

Randa Meierhenry is Mollie Ralston — co-owner of Monkswell Manor who seems to have something to hide. But, what? Meierhenry is great. Her actions and facial expressions show she is a superior actress.

Martin Flower is Christopher Wren — an odd sort of character who is unkept and hyperactive. He’s running away from something, but what? Many say he is the murderer. Is he? Flower is fast becoming an Amish Acres favorite with regular theatre goers. His performance in this production is outstanding.

Ryan Schisler is Detective Sergeant Troter — the police officer who is trying to solve the crime. Can he? Schisler is another Amish Acres favorite, having been at the theatre for three seasons. He’s always great when on stage and knows how to pull the audience into any type of production.

Travis Bird is Major Metcalf — a retired Army officer whose past is mostly secret. Bird is super in this part and make the perfect retired officer.

Charles Burr is Mr. Paravicini — a man who said his vehicle overturned and he needed a place to stay. He appears to be using makeup to make him look older than he is. Burr turns in nice work as this stranger in need of a place to stay.

James Powers is Giles Ralston — husband of Mollie and co-owner of Monkswell Manor. His performance is first-class as he interacts with the guests and his young wife.

Elizabeth Ferris is Miss Casewell — a masculine woman in England with a plan to not leave until she reached her goal. However she won’t share what that goal is. Ferris is terrific as she flaunts her masculine side.

Of course the killer is caught prior to the end of the production. By tradition, however, before the curtain closed for the final time the audience has to swear not to tell whodunit! So I’ll keep that promise. You will need to see this entertaining play if you want to find out who the killer is.