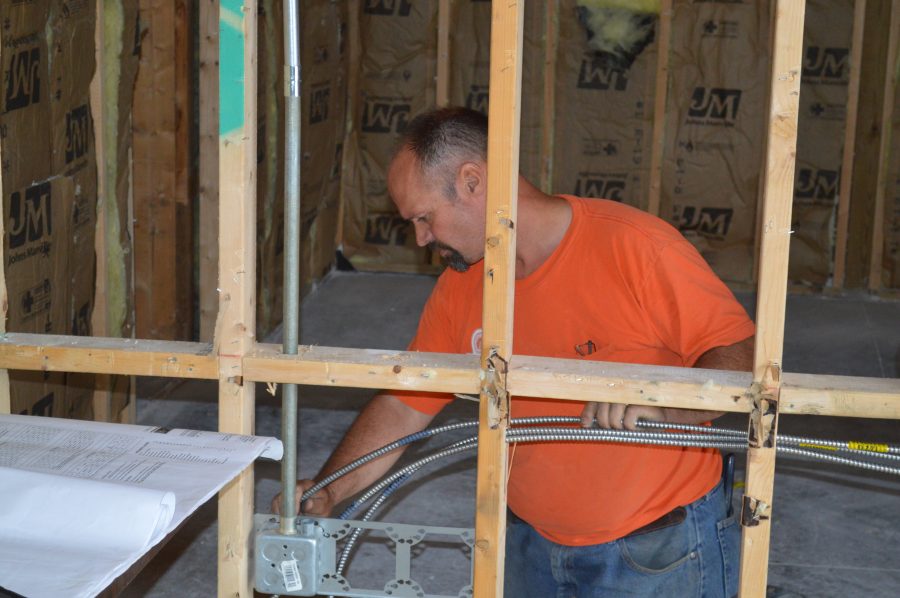 Frank Frazier of Wakarusa-based Schwartz Electric is wiring electric outlets in what will be a storage room in the former VFW building being renovated.

SYRACUSE — What used to be the Veterans of Foreign Wars post at 307 W. Chicago St. in Syracuse will in just a couple of months be transformed into a place where valuable, in demand skills can be learned.

In November, the VFW donated the building, originally built in 1966 according to county property records, to the Wawasee Community School Corp. The school corporation was looking for a place to train students to become welders and the building is helping to make that vision a reality.

A bid was awarded at the July 11 Wawasee school board meeting to R. Yoder Construction of Nappanee to remodel the old VFW building. Soon after the bid was awarded, the interior from front to back was essentially gutted and presently electrical and HVAC work is being done.

Having the building is one of those “win, win” situations, noted Jon Everingham, director of the Pathways Cooperative. Space is currently limited inside the career and technical education building on the Wawasee High School campus for welding classes. The new facility will offer plenty of room with possibility for expansion into other areas besides welding.

Also, the Chicago Street building is close to the high school and is only a couple of buildings away from another building used by the school corporation where students work on boat and watercraft repairs and related projects.

Everingham noted the goal is for the school corporation to have occupancy of the building by the end of September. Earlier the plan was to have it ready by the first day of school (Aug. 17 this year), but other construction or remodeling projects took priority and the bid was not awarded in time for work to begin immediately after the end of the 2016-17 school year.

A shift of the main entrance previously used by the VFW will occur and the new main entrance will be on the east side of the building. Close by will be changing rooms and lockers for both men and women.

Twelve welding booths on order from Clean Air America will be located in the back end of the building. A total of 24 students can be educated in both the morning and afternoon welding sessions, as well as the evening adult classes. Jesse Kimmel, who taught welding classes last year, will return and teach the morning classes. Jeremiah Paseka will teach the afternoon and evening classes.

Paseka comes from the Warsaw Area Career Center where he taught welding for three and a half years. He is presently a welding trainer for one of the Lippert Components plants in Goshen. He noted what attracted him to the Pathways program is welding is essentially a new program, having only started during the 2016-17 school year, and the adult education opportunities available.

“We got our man,” said Everingham of Paseka, noting it will be an accredited testing facility through the American Welding Society. Paseka said he hopes to offer a variety of adult classes from basic to more advanced.

Welding is a skill in demand and in Syracuse alone several companies use welders including Polar Kraft, Polywood and many others. Students can be hired right out of high school, such as one 2017 Wawasee graduate who was hired by Polar Kraft.