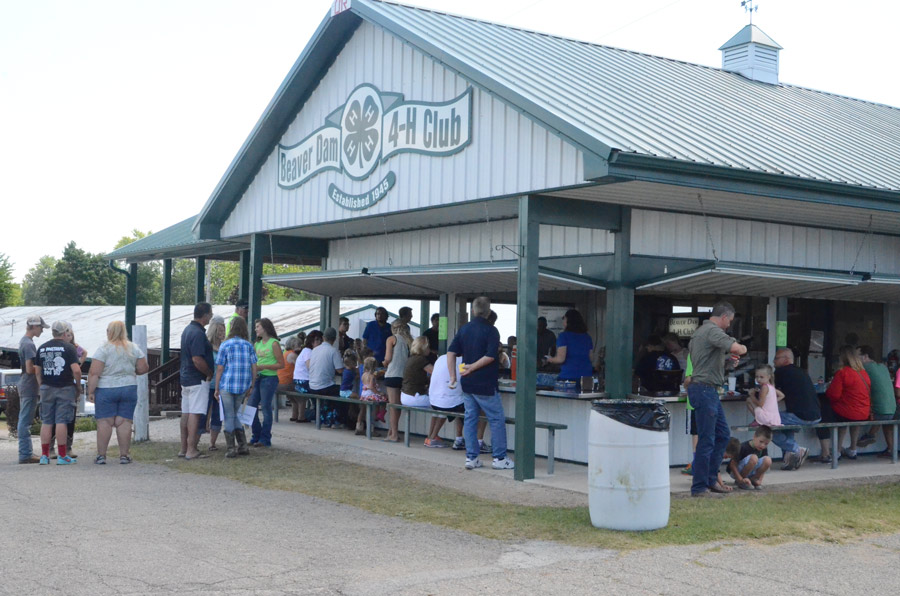 Several local organizations have food booths at the Kosciusko County Community Fair, serving a variety of meals and desserts. Additionally, many of the proceeds from these booths stay within the community or are used for good causes. Shown is one of two booths the Leesburg Lions man serving ice cream and other treats.
Shown is the Beaver Dam Better 4-H’ers booth where they sell a variety of sandwiches, snacks and breakfast foods. (Photo by Deb Patterson)

Leesburg Lions Club serves soft serve ice cream, vanilla and chocolate in cups, sugar cones, milk-shakes and sundaes. These are sold at both of its booths, the main one located at on top of the hill, where it’s been for 50 years, and its secondary location by the diary barn. It receives much of its supplies from Farm Credit Services and GreenMark Equipment of Leesburg.

Lake City Lions Club food stand is, of course, best known for its slush, which it started selling at the fair more than 50 years ago. It serves orange and lemon slush, its most popular flavors. The stand also sells hotdogs and brat sandwiches. Last year the club partnered with the Warsaw Lions Club in order to open the booth by noon each day.

Burket United Methodist Church is the only church with a food stand at the fair. Stop by for a fresh brewed tea, a tasty meal and pie for dessert. The booth is mostly known for its hamburgers, made from locally raised beef. Other popular items include its chili and nachos and cheese.

The Cattlemen and Pork Producers food stand will be serving rib-eye sandwiches, butterfly pork chops, pork burgers, hotdogs and barbecue. Then for dessert they offer pie. Proceeds go toward the Cattlemen’s Twilight Tour, which will be in August, scholarships and to support 4-H’ers in the auction.

All profits go back to the club to pay for books, scholarships for the 8-, 9- and 10-years members and the annual completion trip.

The 4-H Junior Leaders revamped its menu a few years ago to include chicken salad croissants and ham and cheese croissants. Other featured items are caramel apple slices and snow cones.

Proceeds from the food booth stay in the leadership program, helping to pay for community service activities such as adopt a family. Additionally, profits will help the club maintain the memorial garden and bring in funds after the booth was renovated.