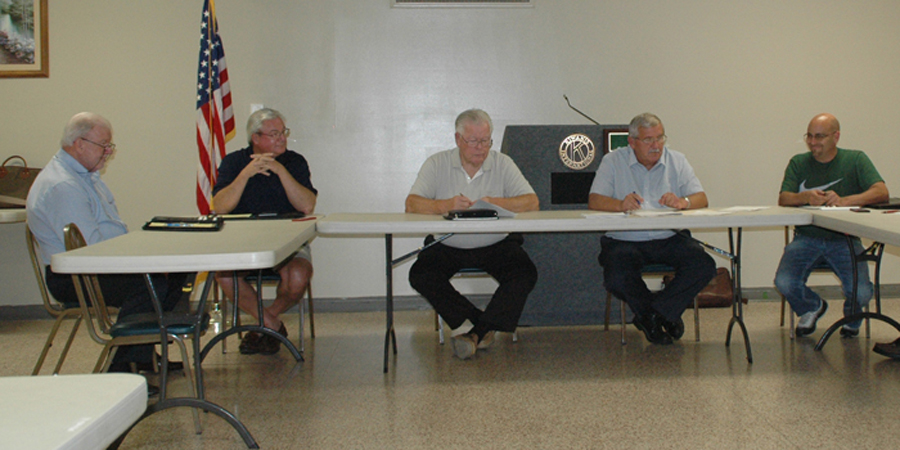 Bob Sanders, seated far left, was remembered by his fellow Lakeland Regional Sewer District board members for his sense of humor, interest in people and ability to see issues from “different angles.” (Photo by David Hazledine)

NORTH WEBSTER — The monthly public meeting of the Lakeland Regional Sewer District board of directors Thursday, June 1, at the North Webster Community Center began on a somber note due to the recent passing of Bob Sanders, an original member of the board, formed in April 2008.

Board President Jim Haney requested a moment of silence, followed by reminiscences by Haney and other members.
“It was a privilege to serve with Bob,” said Haney, adding he learned a lot from Sanders, who, he said, was able to see issues from “different angles.”

“He was genuinely interested in people,” commented Treasurer Mike DeWald, “he listened.”

Those qualities were all on display at the last meeting Sanders attended, when he argued on the behalf of a woman whose property, which she purchased two years ago and has yet to move in to, was not outfitted with a grinder station during the construction phases.

On Thursday, the board voted to accept a bid from Art and Sons of $10,752 to install the grinder station within 30 days. Although Mitchell’s research showed the previous owner may be at fault, the board declined to rescind its decision of a month ago, adhering to Sanders’ belief it should take the “compassionate” route in light of the woman’s payments made in expectation of receiving a grinder and the lack of direct documentation of the previous owner’s possible misrepresentation of the property.

During engineering reports from Casey Erwin of DLZ, the board passed a motion authorizing $5,191 to repair check valves which exploded due to ice build up caused by lack of plant operation during the winter. There was consternation among the board about the lack of winterization on the part of Crosby Construction, and the board will further explore the matter of who should pay.

The board is also seeking more information in the matter of farming tile possibly disrupted by construction near the water treatment plant. The district may be on the hook for around $2,000 in exploratory excavation to discover if the damage actually occurred. Erwin has been asked to set up a meeting with the farmer and a member of the board.

All invoices for additional funding items approved by the U.S. Department of Agriculture, including a stone access road, telemetry between pump stations and the treatment plant must be submitted by the end of August. A motion passed authorizing Erwin to oversee those two projects.

DeWald reported “loss of traceability issues” related to ongoing issues with Interra Credit Union’s handling of deposits. At the recommendation of DeWald and Jones Petrie Rafinski Chief Financial Officer Kenneth Jones, the board voted to open a new account with First State Bank.

According to DeWald the district is currently around $19,000 “behind the eight-ball,” largely due to bond payments. The board authorized $152,783.34 in payments for May.

To improve efficiency, the board voted to change inspection days to Monday thru Friday to better accommodate contractors who prefer inspectors to be available during the work week rather than Saturday.

The board will also direct Jennifer Ransbottom to add information on customers bills informing them they need to have a permit by Sept. 1.

Before adjourning, the board agreed to schedule a ribbon cutting ceremony for the water treatment plant at 1 p.m. Friday, July 21, and a separate open house for the public from 9 to 11 a.m. Saturday, July 22.