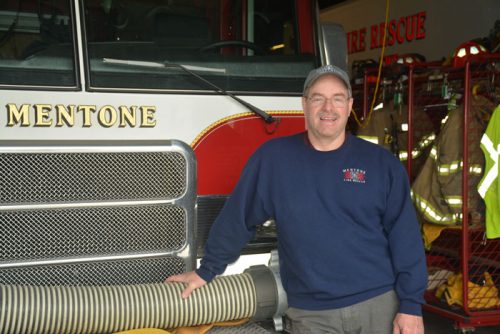 Mentone Fire Chief Mike Yazel strives for his department to be a visible and important part of the community, not just in emergency situations.

MENTONE — Mentone Fire Chief Mike Yazel isn’t timid when it comes to lauding his smoke chasing brethren. “If you need do get something done, call a bunch of firemen,” he said. “It’s just their mentality. When they see a problem, they go out and fix it.” In fact, that’s basically one of Yazel’s favorite mantras of life: “Solve the problem.”

Yazel has served on the Mentone Tri-Township Volunteer Fire Department for nearly 39 years and has been its chief for the past decade. A native of Mentone, Yazel graduated from Tippecanoe Valley High School in 1977.

The 26-member Mentone Fire Department provides its services in parts of Kosciusko and Fulton counties, covering approximately 100 square miles of territory. The department itself is one of the oldest in the area, tracing its roots back to 1886.

Yazel noted these days, a majority of the department’s calls request their services as a rescue squad as opposed to as a firefighting unit. “There are actually much fewer structure fires these days,” he said, noting better technology, building codes and other factors mean full fledged fires are fortunately less frequent.

The department is under the jurisdiction of a fire control board, consisting of the trustees from the three townships they serve, Harrison and Franklin in Kosciusko County and Newcastle in Fulton County, along with the town of Mentone. Set up in the 1940s, Yazel noted the fire control board has an outstanding relationship with the fire department and provides him and his men everything they need to be a well-equipped and efficient unit.

As fire chief, Yazel has been very candid in his belief the department should be an integral part of the community they serve. To that end, he makes sure they are very visible outside of their role as emergency responders. They hold several fundraisers throughout the year, including a fish fry and community breakfast, but also help to raise money for other important needs in Mentone and the surrounding area.

He added a few years ago, Mentone was struck by a vicious summer storm that resulted in a power outage in the town that lasted for two days. Using their emergency generators, the fire department opened its doors as an emergency shelter for residents. They also fired up their grills and provided hot dogs and hamburgers for the community. “We want to leave our footprint in the community for things that aren’t necessarily emergency related.”

In addition to his role as fire chief, Yazel also is an accomplished artist, working in several mediums, including glassblowing and plein air painting. He also participates in historical reenactments and is the treasurer and past-president of the National Muzzle Loading Rifle Association, which boasts more than 16,000 members throughout the country.

Yazel also noted he was the owner of the company that brought the internet to Mentone back in the mid 1990s. He said he needed internet access to support his orthopedic manufacturing company he owned, but none of the providers at the time were willing to come to the town, so he decided to do it himself. He eventually sold both companies and returned to his other interests.

With his wife June, Yazel has two adult children, Ethan and Isabelle, both of whom recently graduated from Ball State University.

“Firefighting is a young man’s game,” he said, noting the biggest problem facing most volunteer fire departments is finding committed individuals to fill their rosters. “It’s a big commitment to be sure, but it is a great way to give back to your community.”