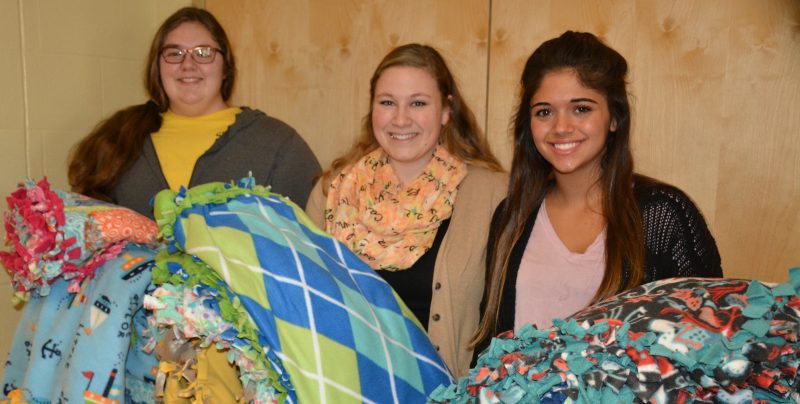 Tippecanoe Valley students, from left, Susan Nickerson, McKenzie Murphy and Olivia Trippiedi hold some of the blankets created through their “Covered By Love” project. The blankets will be donated to Riley Children’s Hospital as well as local pediatric centers, which will pass them on to their young patients.

AKRON — The idea began simply enough for three students at Tippecanoe Valley High School. As members of the Kosciusko Youth Leadership Academy, juniors Olivia Trippiedi, McKenzie Murphy and Susan Nickerson were tasked with coming up with a service project as part of the program’s curriculum requirements.

According to the KYLA website, “In addition to attending formal classroom training, each student must donate a total of 10 hours toward a community service project. The students must also present their project in the form of a formal white paper project presentation to their peers, board members and area invited dignitaries and guests at the end of the academic year.”

The website goes on to note many of the students go on to contribute many more than the 10 hours mandated by the program, a minimum certainly eclipsed by the trio. If they were keeping track, they probably would be able to fulfill the commitments of their entire class.

“Covered By Love” is the name the ladies have given to their project. Initially, their intentions were to produce a batch of handmade blankets to present to Riley Children’s Hospital in Indianapolis to be given to young patients. As they proceeded, however, they began to realize their sights could be set much higher, and through enlisting the help of some of their schoolmates they could bring feelings of warmth and love to many more children in need.

Each blanket is labeled with the group’s name and 1 Corinthians 16:14, which reads “Let all that you do be done in love.”

The ladies took a proposal to Olivia’s mother, Alissa Trippiedi, who also serves as a math teacher at TVHS. Their wish was for the elder Trippiedi to sponsor the group during the school’s “Student Resource Time,” an 85-minute period each Thursday morning for students to participate in clubs or activities of particular interest to them. According to Aaron Leedy, Tippecanoe Valley School Corporation’s director of marketing, public relations and grant writing, the groups are usually formed by teachers and focus on topics about which they are passionate, such as music appreciation, kick-boxing, cookies and canvas and walking for fitness.

Alissa Trippiedi added Covered By Love is one of the only groups proposed and led by the students themselves. “They came to me wanting this to be one of the enrichment programs,” she said. “I think this is a great thing they are doing.”

Trippiedi welcomed the girls’ request and agreed to sponsor the group in her classroom. At 9:55 a.m. each Thursday, 18 students bring their talents and their scissors to create blankets to send not only to Riley, but also to local pediatric centers in the area. The group has conducted several fundraisers, including informational/donation booths at TVHS basketball games. They’ve also sought donations from area churches and created fliers seeking donations.

“It’s exciting putting together a project that goes toward something really rewarding,” said Olivia Trippiedi on the eventual presentations to the hospitals. “We all have a big passion for kids. This is just something we really enjoy doing.”

So far, the group has created around a dozen blankets. They currently have the funds to make around 60 more, however, if they continue to receive donations they intend to keep making as many blankets as they can.

“This is the first time I’ve been involved in putting something together that is so meaningful,” Nickerson added. “I especially love doing this project with my friends.”