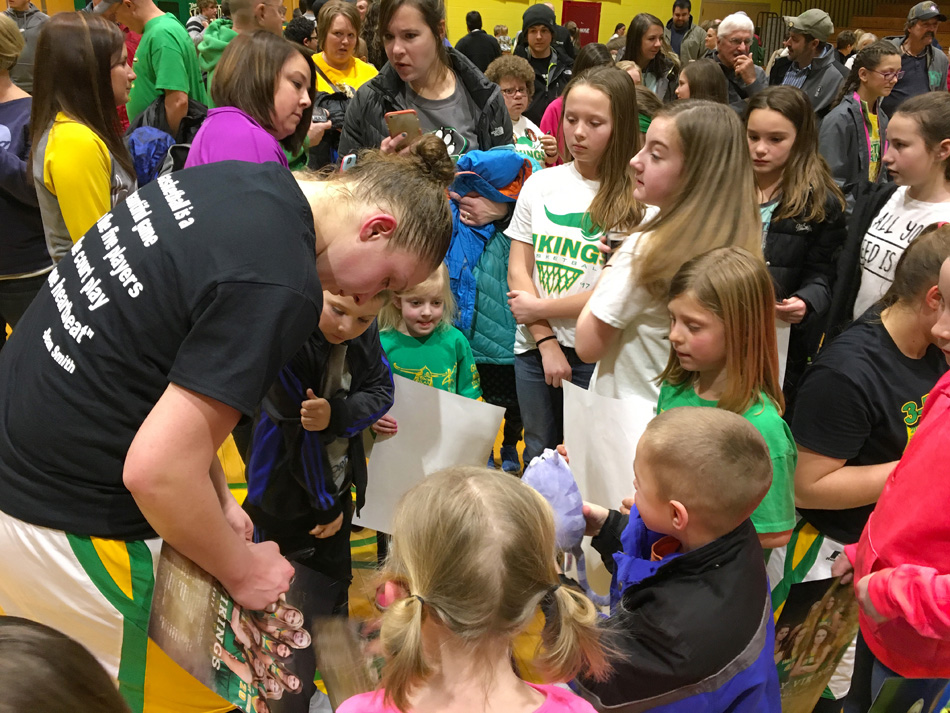 The choices for the 2016-17 Ink Free News All-Area Girls Basketball First and Second Team selections didn’t have a definitive pattern. Great guards, all-time program stalwarts, the future of the programs. There was a little bit of everything from the area this year, a fair representation of several programs taking big strides and others starting to assert themselves.

Our list features three of the top players in the history of their programs in Aly Reiff of Whitko, who is our Player of the Year, along with Anne Secrest of Tippecanoe Valley and Dayton Groninger of Warsaw. All three have made indelible marks in their years with their respective outfits, Reiff and Secrest finishing as the all-time leading scorers and Groninger sixth in the storied Warsaw program.

Also making the First Team are junior Hope Fancil at Lakeland Christian Academy, who could wind up as one of the best to ever suit up for the Cougars, and sophomore Sophie Bussard of Tippecanoe Valley, who does a little of everything on the court for Valley.

Aly Reiff, Whitko – The senior guard will leave South Whitley as possibly the most decorated girls basketball player ever at the school. Reiff is the all-time leader in nearly every major statistical category, including career scoring, season scoring, assists, rebounds, steals, etc. etc. etc. On her way to Xavier University next fall, Reiff helped Whitko to the most wins in a season at 21 along with the program’s first-ever No. 1 ranking, which it held in Class 2-A for much of the season.

Anne Secrest, Tippecanoe Valley – Not much else can be said about the phenomenal forward from Akron. Secrest is the lynchpin of the most successful class in Valley girls basketball history, stringing together three straight sectional titles, three straight Three Rivers Conference titles (and a 28-game TRC wins streak that’s still in tact), three straight 20-plus win seasons and leaves as the all-time leading scorer in Tippecanoe Valley history. The lone sliver of space between Reiff and Secrest was Reiff’s McDonald’s All-America nomination and pure statistical comparison. There isn’t much difference at all, but Secrest’s regular season per game averages of 14.9 points, 7.3 rebounds, 3.1 assists, 2.6 steals and 1.6 blocks are nothing to scoff at. Secrest also had a notable statistical marvel in recording a steal in all but one game this season, 63 in total, and had six double-doubles during the regular season. Secrest did win our Player of the Year award as a sophomore and a junior, which were the first two years of our awards.

Dayton Groninger, Warsaw – Quietly, the smooth shooting of Groninger lifted her to a milestone and helped Warsaw turn around its fortunes this past season. Groninger scored her 1,000th career point Friday night against Northridge in the sectional semi-final and has consistently led Warsaw back to prominence. The Tigers hit the 20-win plateau for the first time in four years this past week after its sectional win against Elkhart Memorial, and Groninger’s prowess was a big part of it. Averaging 16.5 points per game, she also offered about nine rebounds and three assists per contest while teams focused on stopping her. The Indiana Wesleyan recruit had nine double-doubles and scored a career-high 31 points in a win against Huntington North.

Hope Fancil, LCA – There almost was no junior season for Fancil, who was a Warsaw Tiger to start the school year without much aspiration to continue basketball. But a change of heart, and location, had Fancil end up at Lakeland Christian Academy, where she is flourishing. Fancil missed the first four LCA contests due to transfer rules, but came on strong for the Cougars. Fancil only scored less than 10 points twice in 19 games, and had some ridiculous fantasy stats. Her career-high 31 points against Cornerstone Christian included nine steals, and she twice scored 23 points in wins over Trader’s Point and Granger Christian. In those two games, she had 17 steals, part of a season with 82 total thefts. For the season, Fancil averaged 18.5 points, 3.4 rebounds, 4.2 steals, 1.2 assists and 2.2 blocks. Fancil helped LCA deliver its first-ever winning season at 12-11.

Sophie Bussard, Tippecanoe Valley – While much of the attention for Valley goes to its senior class, Bussard is as much of a “glue guy” as there is in the area. The slick sophomore point guard helped Valley back to the summit this year in the TRC in a 9-0 mark, and was as solid as it gets with a 2:1 assist-to-turnover ratio at the point in January. Bussard scored a season-high 16 points against NorthWood back in January, had 14 points in wins against Plainfield and Plymouth, and collected 10 rebounds and seven steals in another win versus Winamac. Bussard is the only sophomore to make our list.

Brianna Cumberland, Whitko – Cumberland and Reiff will historically be attached at the hip, and rightfully so. As only the second person every to score 1,000 points at Whitko, Cumberland was the Robin to Reiff’s Batman. A streaky shooter, Cumberland scored at a 12.1 ppg clip, and had a huge game against Northfield, hitting six threes and totaling 23 points, which she matched against Westfield, both wins and season highs. Cumberland also notched 19 points and nine steals in a win against Fort Wayne North Side. Cumberland will play next season at the University of St. Francis.

Savannah Feenstra, NorthWood – Feenstra became an ultra-important part of NorthWood’s successful 2016-17 season when sophomore Riley Hershberger was lost to a knee injury. In the absence, Feenstra took on a lot of the interior load and registered quality games like 14 points and 12 rebounds in an upset win at Tippecanoe Valley and an 11-point, 12-rebound win against South Bend Washington. Looking every bit the prototypical NorthWood post player, Feenstra averaged 9.4 points and 7.9 rebounds per night, had five double-doubles and posted 10-plus rebounds on 10 occasions in the regular season.

Madi Graham, Warsaw – Warsaw doesn’t have the bounce back season it had without the artistry of Graham. Showing flashes of dominance, but also times of a quality role player, Graham switched roles in the offense and shined. Averaging 11.0 points per game, Graham had special days like performing as the MVP of the Lady Tiger Classic in a pair of wins against Mishawaka and Chesterton. She had 31 points, six steals, five rebounds and five assists in those two games, but also scored 21 in a win against Fort Wayne Carroll, and 19 points and five boards in the sectional win against Memorial.

Aubrey Schmeltz, Wawasee – The play of Schmeltz was pivotal in Wawasee picking up a couple earmark wins under rookie head coach Matt Carpenter. Her 19 points were key in a win over NorthWood, the first over the Panthers since 2011, and her 17 points, seven rebounds and two blocks made the difference in another upset, this time against No. 1 Whitko, the first time Wawasee had beaten a top-ranked team since 2007. Schmeltz, a sizable presence inside, scored 9.5 points per game during the season had at least seven rebounds in nine games and averaged 10 points per game in NLC contests.

Taitlyn Trenshaw, NorthWood – Perhaps the most fiery competitor on the entire list is Panther senior guard Trenshaw, who wore her emotions on her sleeve every night. Her numbers were solid at 10.5 points, 4.8 rebounds, 4.6 assists and 2.8 steals per night during the regular season. Her ball handling at the point helped carry NorthWood to a 16-win season, 11 of those wins before Christmas. Her biggest game came against Columbia City in the Northridge Tournament, where Trenshaw posted a line of 27 points, eight steals, five rebounds and four assists in the win. Trenshaw also had 20 points in a win over Rochester, 11 rebounds in a win against Goshen and had double-digit scoring in 13 contests. 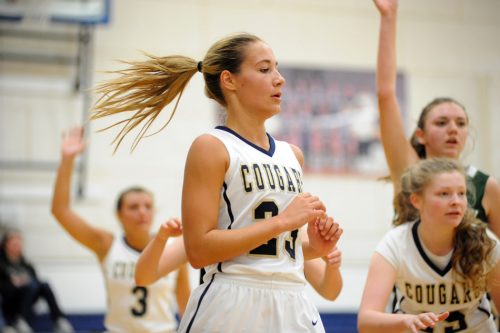 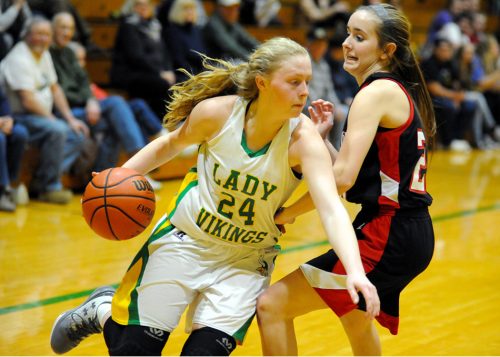 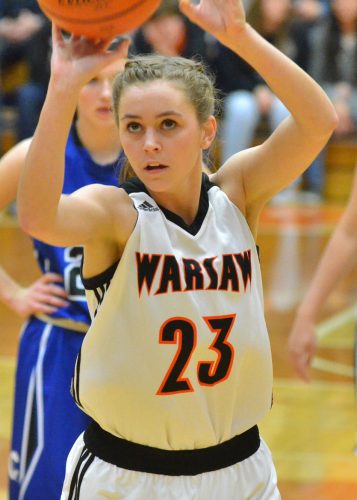 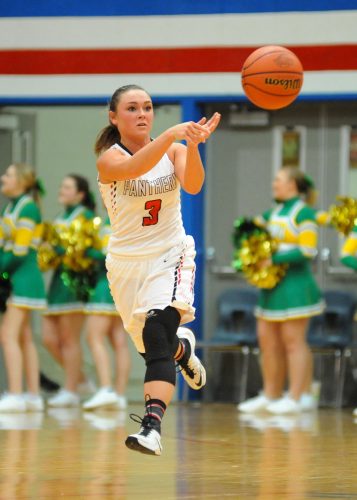 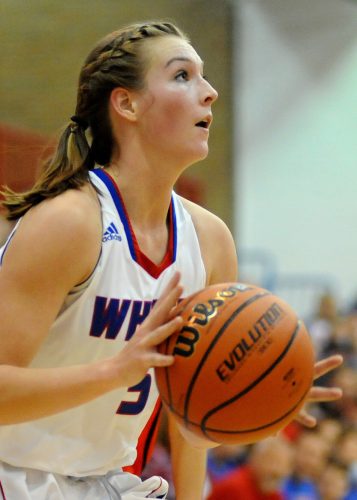 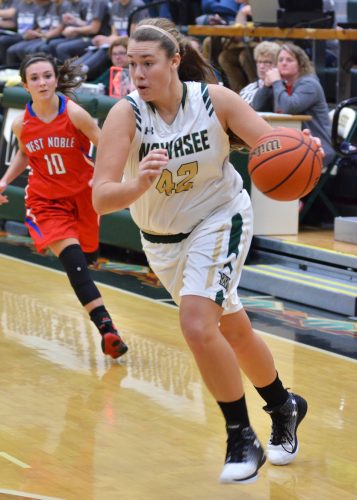 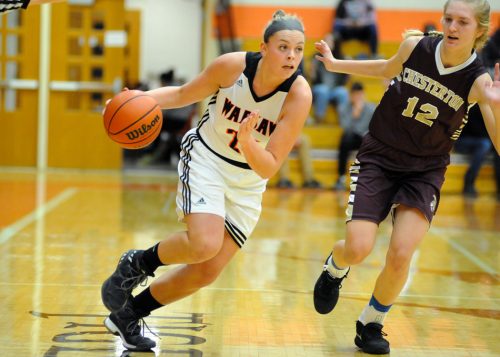 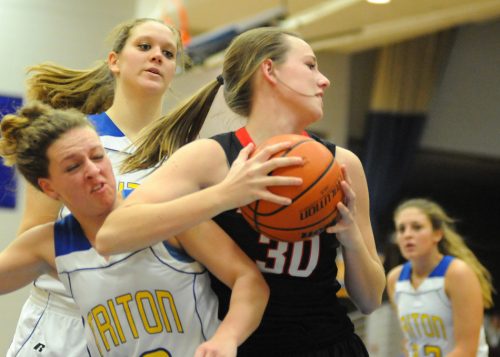