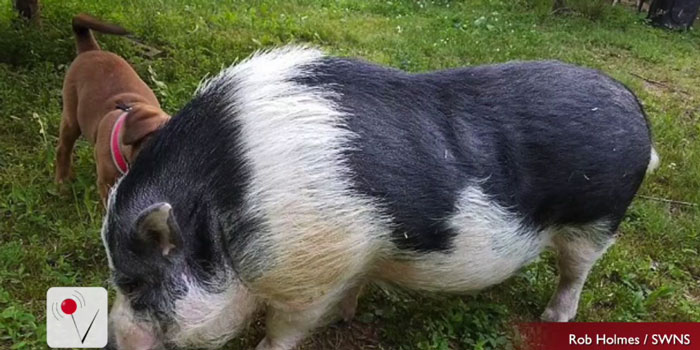 GATLINBURG, TENN. — One family has a surprising reason to be thankful in the wake of the devastating wildfires that raged through Tennessee, claiming lives and property.

Rob Holmes returned to his charred home the day after the fire to survey the damage and heard a faint “oink.” That sound led him to the spot where Charles, their beloved family pet pig, had survived the intense flames by burying himself in the ground.

Rob and Amy Holmes escaped their burning home with seconds to spare, carrying their 18 month old son, 15 year old daughter and four dogs. They fled through heavy smoke and fallen power lines before finding shelter in a nearby hotel.

In their exodus, Charles, a 200-lb. Vietnamese potbellied pig, was left behind. Fifteen-year-old Andrea spent the night crying over what she perceived was the fiery fate of the pig she had cared for over the last 3 years.

The intelligent pig turned firefighter by kicking dirt on flames that crept toward him, and survived the blaze by lying in a mud pit.

Charles is being treated at the University of Tennessee College of Veterinary Medicine for smoke inhalation and hooves that were singed as he kicked back flames. He is expected to make a full recovery. Volunteers have created a GoFundMe page to pay for the large veterinary bills Charles and the Holmes family will have.

After surviving a fire that destroyed their house and melted the alloy rims off of their car, Rob Holmes calls Charles the pig “a warrior.”