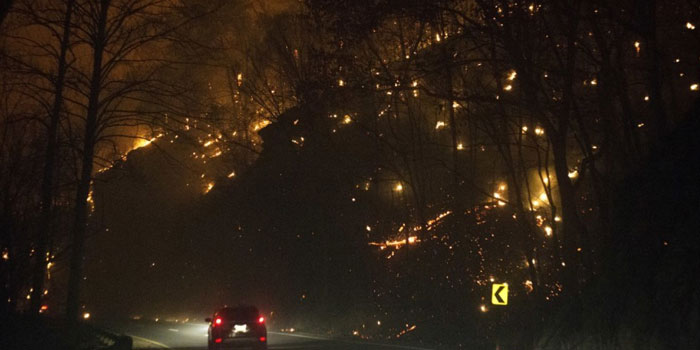 GATLINBURG, TENN. — Parts of two popular Tennessee tourist towns on the edge of Great Smoky Mountains National Park were on fire Tuesday morning, along with much of the timberlands surrounding them.

A fire burning on the Chimney Tops mountain, one of the most popular hiking destinations in the Smokies, spread to the quaint resort cities of Gatlinburg and Pigeon Forge, Tenn., as emergency officials ordered evacuations throughout Sevier County and shut down the park.

There were no reports of fatalities as of Tuesday morning, but the Tennessee Emergency Management Agency said that three people with severe burns were transferred from University of Tennessee’s Knoxville hospital to Vanderbilt Medical Center in Nashville overnight. A fourth with facial burns continues to be evaluated at the hospital in Knoxville, TEMA said.

The agency estimated that more than 14,000 visitors and residents were evacuated from Gatlinburg, with thousands more being forced to flee Pigeon Forge and other towns and villages in the area.

The fire exploded from 10 acres Sunday night into a 500-acre blaze Monday night, according to Reuters.

“Conditions remain extremely dangerous with trees expected to continue to fall,” officials at the country’s most visited national park wrote Tuesday morning on Facebook. “Officials are asking that motorists stay off the roadways throughout the area. Travel in the Gatlinburg area is limited to emergency traffic only.”

“Even with the rain that is currently falling there, the fires continue to burn and structures remain engulfed with little hope that the rainfall will bring immediate relief,” TEMA said Tuesday.