BREMEN — While it surely was not a perfect night on the court for the Tippecanoe Valley girls basketball team, the class 3-A No. 4 ranked Lady Vikings still made plenty of noise in their season opener. Valley used a strong second half showing to pick up a 55-24 win over Bremen. 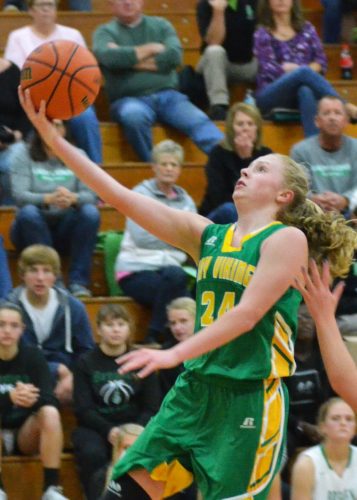 Sophie Bussard was one of three Valley scorers in double digits during Thursday’s win at Bremen. (Photos by Nick Goralczyk)

“This is game one and we’re still trying to figure out rotations and that will be an ongoing process,” said Valley head coach Chris Kindig. “Truly, you see our balance tonight, that’s our depth showing through already. We’re a work in progress, we don’t have to be our best in game one. We just want to keep getting better and better and we will.”

As expected, the Lady Vikings needed to knock some rust off through the first two quarters. Both teams seemed to be playing on pure adrenaline in the first quarter. It was finally time for these girls to play on the hardwood again and the excitement was easy to see. But, that excitement led to a lot of wild play from both sides to start out. Fouls and turnovers told the story of a first quarter that ended with Valley leading 11-7.

The Vikes opened up the second on a quick 6-0 run but inconsistent play really told the story for both teams in that quarter as well. Valley finished the first half with an unofficial total of 12 turnovers. A buzzer-beating three from Bremen’s Maggie Whitinger made things interesting at the half as Valley led by six, 24-18. That was the closest Bremen would be the rest of the way.

Valley found its stride in the second half. The team was not hitting every shot attempt, but it sure felt that way. Meanwhile, Valley’s defensive effort was excellent in the final two quarters. The Vikings outscored Bremen 18-0 in the third quarter to open up a 42-18 lead going into the final frame. This was the team Valley fans had grown accustom to seeing over the past three seasons. Well, that was not entirely true. 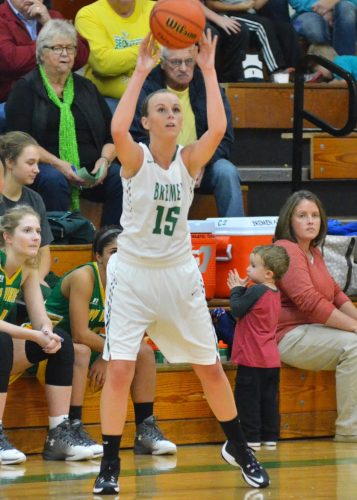 Bremen’s Maggie Whitinger passes the ball to a teammate.

As Kindig mentioned, the Vikings were using a much more balanced attack. Anne Secrest had a modest 11 points for Valley. That tied for the team lead with Addy Miller. Sophie Bussard had 10 points of her own. In fact, every player on Valley’s roster scored except for one. The girls were not lighting up the scoreboard.

Meredith Brouyette did not unleash some barrage of three-point shots. Secrest did not destroy the pain offensively. Valley made its statement by making its opponent uncomfortable and by doing the little things right, more so in the second half, to earn a decisive victory.

“I think we have work to do on the defensive end.” Kindig stated. “We talked about not having to outscore people this year. We can do it if we have to but I’d rather not have to be that type of team. We have to improve defensively, we were a step slow. But, its the first game and we weren’t expecting for this to be our best game.

“There’s no question that we’ll keep getting better. We have some big challenges ahead and there will be things to work on. But, I’m not concerned with anything I saw tonight. This team has some great potential.” 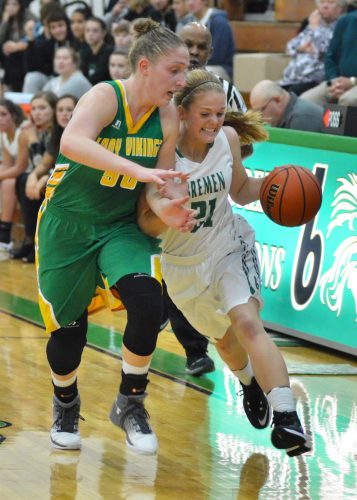 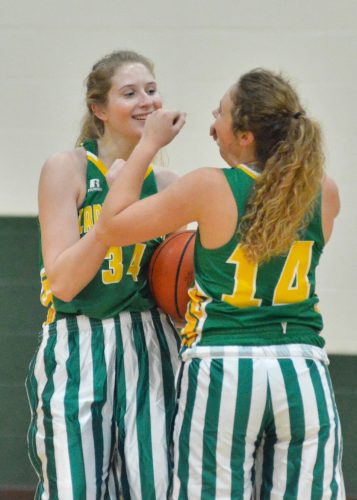 Asia O’Connor (left) and Meredith Brouyette were dancing during warmups while “Go Cubs Go” played over the PA system in Bremen’s gym. Cubs fans everywhere will be dancing for the foreseeable future.