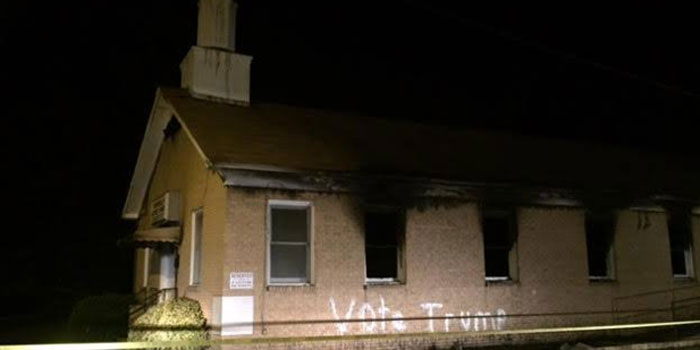 GREENVILLE, MISS. — A black church in Mississippi was burned and vandalized with pro-Donald Trumpgraffiti late Tuesday.

Authorities responded to the fire at Hopewell Missionary Baptist Church in Greenville, Mississippi, Tuesday night. Delta Daily News reports that the majority of the damage was to the main sanctuary and there were no reported injuries. Someone had spray-painted the words “Vote Trump” along the side of the building.

A woman at the nearby Rose Hill Missionary Baptist Church told The Huffington Post that Hopewell is a historically black church. She said the community is in shock over what happened.

The FBI told The Clarion-Ledger, a Mississippi newspaper, that it is aware of the situation and is investigating to “determine if any civil rights crimes were committed.”

There is already a GoFundMe page raising money to repair the church. GoFundMe told HuffPost it is working with the organizer of the page and will only release the funds to the church directly.