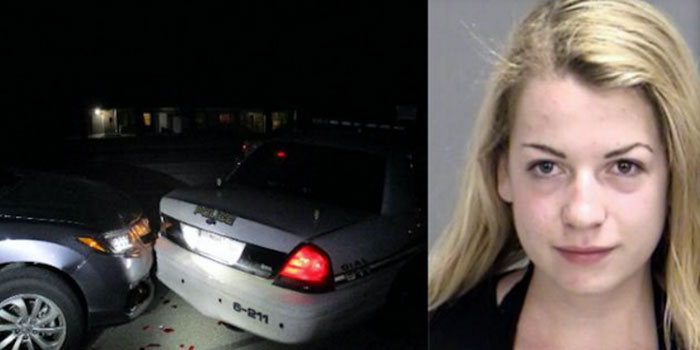 BRYAN, TEXAS — A 19-year-old Texas teen was arrested for driving while intoxicated after she collided with a parked police car while attempting to send a Snapchat message, police said.

Miranda Kay Rader, a Texas A&M University student, was released on a $2,000 bond, CBS News reports. A police report indicated she may have been trying to send a topless selfie, though it didn’t say so explicitly.

“The white female driver with an unclasped brasserie, was attempting to put a black blouse on,” the Bryan, Texas police officer whose car she hit Wednesday wrote in his report. “I also observed an open, green-tinted glass bottle of wine in the center console cupholder. I [asked] her why she was not dressed while driving and she stated that she was taking a Snapchat photo to send to her boyfriend while she was at the red light.”

“Don’t Drink and Drive! Don’t #snapchat photos to your boyfriend and drive!” the Bryan Police Deptartment wrote on Twitter.