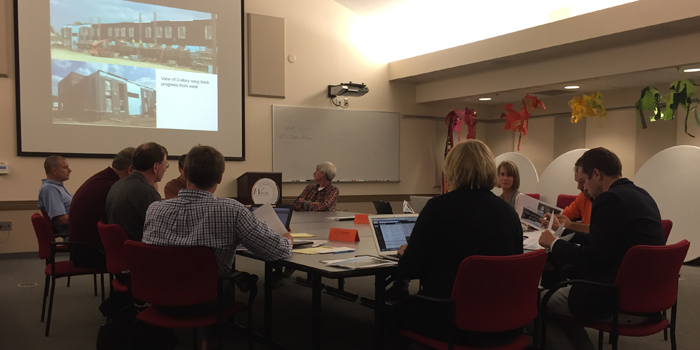 Board members look at updates on school building projects.

WARSAW — At the Warsaw Board of Trustees work session on Tuesday, Oct. 11, board members learned of an opportunity of a partnership with a local business, appointed a District 5 council member and discussed the rebuilding of the transportation building.

Joel Wihebrink with Wihebrink Landscaping Management came to the board work session to suggest the trustees consider a partnership with his company. Wihebrink explained that the majority of his employees are out of work for seven to ten weeks out of the year because of the weather. He stated some of his employees can do snow removal during the winter, but he does not have enough snow removal business to compensate for the lack of landscaping work during the winter.

He stated that it can be difficult to keep employees returning when they have to support themselves when they are out of work for several weeks. Wihebrink suggested that perhaps his employees could work at the school doing custodial work during the winter when they do not have work at Wihebrink.

Superintendent Dr. Hoffert applauded Wihebrink for “thinking outside the box.” The trustees stated they were in favor of the idea and keep the partnership in mind as the winter months are coming up.

Penrod stated that he is not exactly sure of a timeline for when construction will begin but he said Robinson Construction wants to begin work soon so they can begin before it snows.

“The building itself should go up pretty quick,” said Penrod.

Due to the recent resignation of board of trustee’s president Jennifer Tandy, the board recently interviewed three people to fulfill Tandy’s remaining two years. The board unanimously voted to have Jeremy Mullins, commercial manager for Louis Dreyfus in Claypool, take Tandy’s place in District 5. Mullins was not at the meeting but will begin serving on the board at the next meeting.

Board member Randy Polston said, “All of the candidates were outstanding,”