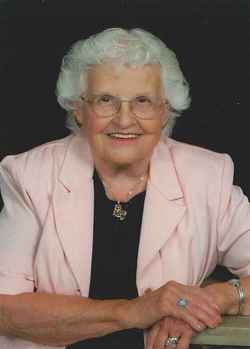 Helen lived her lifetime in Nappanee area. She was a 1943 graduate of Nappanee High School. Her first job was working at Miller’s Grocery Store. She graduated from the Tobias Beauty College in South Bend. Following graduation, she worked at the Walter’s Beauty Shop for 9 years. In 1953, she opened Helen’s Beauty Shop and retired in 2003, after 60 years of service. For many years, Helen was the hairdresser for Wright-Yoder and Thompson-Lengacher and Yoder Funeral Homes.

Mrs. Truex enjoyed traveling with her husband. She was an avid Cubs fan and a proud Chevy owner. She enjoyed working outdoors and attending sporting events for her grandchildren and great-grandchildren. Thanksgiving dinners in her home were their family tradition every year.

Family and friends may call from 1-4 p.m. Thursday, Aug. 11, at Thompson-Lengacher and Yoder Funeral Home, Nappanee. Funeral services with an Eastern Star Memorial Service will begin at 4 p.m. Rev. Janet McFall-Brown will officiate and burial will be in Bremen Cemetery.

Memorial contributions may be given to American Heart Association, United Cancer Services of Elkhart County or The Center for Hospice.

“ A Beautiful Life” – A beautiful life that came to an end, she died as she lived, everyone’s friend. In our hearts a memory will always be kept of one we loved and will never forget.