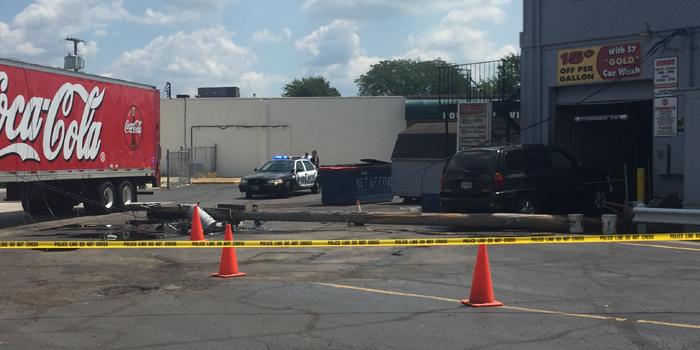 Police investigate an accident in which live power lines fell onto a semi-trailer and a nearby vehicle. (Photo by Melissa Sorensen)

WARSAW — No injuries were reported yesterday, Tuesday, July 19, after live NIPSCO electric lines were pulled down onto two vehicles.

At approximately 12:38 p.m., officers with the Warsaw Police Department received a call that a semi-truck had hit a pole near the Warsaw Ace Hardware store. They arrived to find live wires down on top of both the semi and a nearby car.

The driver of the red 2006 International semi, Ahkiemjabbar Kelley, 44, Hays Park Drive, Kalamazoo, Mich., had been delivering Coca-Cola. He told officers he was driving through the parking lot when the front end of his semi-trailer hit a low-hanging wire. The force of the impact caused the pole to fall, bringing the wires down on top of the semi and on top of a nearby black 2004 GMC Envoy, driven by Ronald L. Mitchell, 53, North Parks Schramm Road, Warsaw.

Mitchell had been waiting to pull his vehicle into the car wash when the wires fell. He remained inside the car until NIPSCO turned the power off.

Damage resulting from the accident is estimated up to $25,000.