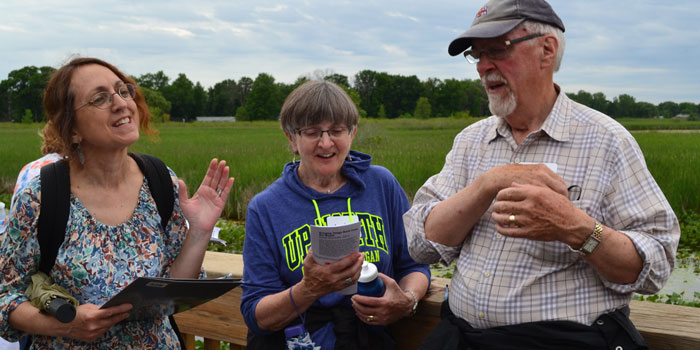 Indiana’s poet laureate Shari Wagner, left, recites her poem “At Dawn in the Subdivision” during a stop along the south side of Syracuse Lake while Marty and John Bender listen beside her. Wagner read other Indiana poet’s pieces during the Next Indiana Campfires walk, tying them into the types of landscapes along the trail. (Photo by Sarah Wright)

SYRACUSE — While the weather at first threatened a soaking walk, the slight drizzle lessened and eventually ceased as about 25 walkers set off on the Next Indiana Campfires walk Thursday, June 9, along the Syracuse Lake portion of the Syracuse-Wawasee Trail. The goal? To connect nature, literature and Indiana’s bicentennial.

Just shy of 5 miles, the walk featured Indiana’s sixth poet laureate Shari Wagner, of Westfield, as its facilitator. Wagner has area connections, having been born in Goshen; she is also a Goshen College graduate.

As facilitator, Wagner picked seven poems, which she recited at certain locations along the trail. Poems included “Refuge” by Mary Fell; “Roadside Marker” by Jared Carter; “Bringing Things Back from the Woods” by David Shumate; “At Dawn in the Subdivision” and “Olin Lake” both by Wagner; “Future Home of the Mammoth Mega Church” by Jessica D. Thompson; and “Glacier” by Jared Carter. At the end of the walk, Wagner also read excerpts from Scott Russell Sanders’ “Wildness.” 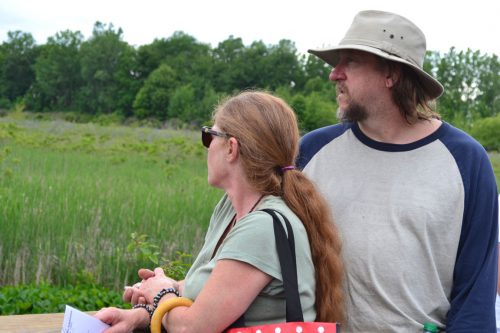 Wagner said she picked the poems based on their connection to the landscapes along the trail. She also used each reading to spark discussion, with topics ranging from preservation and changing land usage to how nature can connect people as seen with the 25 walkers who participated.

Leah Nahmias, director of programs and community engagement with Indiana Humanities, noted that is what Next Indiana Campfires is about: connecting people, exploring Indiana’s different landscapes, reading literature from Indiana writers in honor of the bicentennial and sparking conversations.

“Some are locations (participants) haven’t heard of — hidden gems in their own backyard,” Nahmias said.

Similar events will span the state from now until November, including at Merry Lea Environmental Education Center, Indiana Dunes National Lakeshore, Limberlost State Historic Site, Prophetstown State Park and other sites that show the gamut of what Indiana has to offer. Nahmias noted the events will include more hikes in addition to bicycling excursions and canoeing trips. 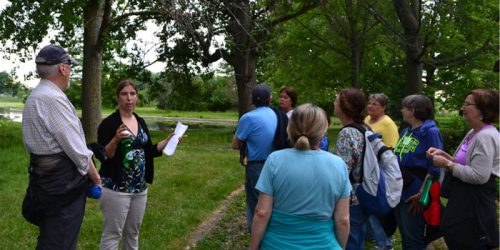 “Megan (McClellan, director of Syracuse-Wawasee Trail) reached out to us right away and had great ideas,” Nahmias said, adding that ultimately led Indiana Humanities to pick Syracuse as one of its destinations.

Nahmias said she was excited to come to Syracuse, especially having grown up in southern Indiana. “You get to see different landscapes,” she noted.

Indiana’s park system started as a centennial project, Nahmias said. She hoped the Next Indiana Campfires would spark a conversation about its future and other conservation efforts.

Along the path, walkers were able to see birds, a muskrat, a few deer and a rabbit. They also caught the notice of homeowners and people driving by, including one car that stopped to ask what was going on.

The walk concluded with a dinner and final discussion, focusing on ways to reconnect with wildness and appreciate one’s surroundings. Participants also discussed how best to give children an appreciation of wildness and nature beyond their electronic devices. 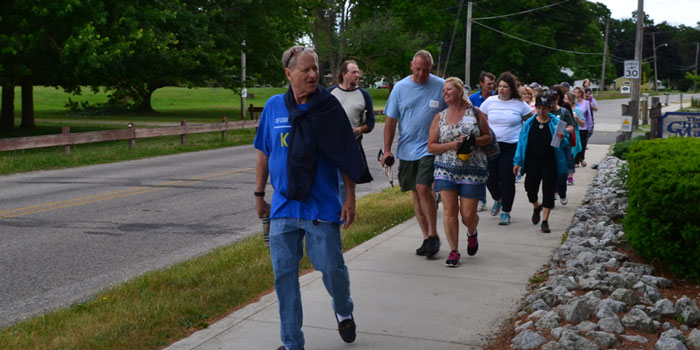 Next Indiana Campfires participants walked just under 5 miles along the Syracuse-Wawasee Trail, enjoying nature and readings from Indiana writers. Here, walkers travel on the East Pickwick Drive portion of the trail, where they spotted some deer. (Photo by Sarah Wright)