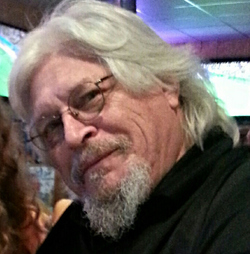 Born in 1949 to Richard and Norma Rogers, he grew up as older brother to Kelly (Deloris) Rogers and Kim (Lonnie) Wingett in Goshen. Rod is a 1967 graduate of Wakarusa High School. He was a U.S. Army veteran serving in Vietnam 1969-1970. When returning stateside he married his high school sweetheart, Kathy Culp Rogers. During their 44-year marriage they made their home in Indiana and Arizona.

They had two daughters: Rocki Stillson, Nappanee; and Renee’ (Shane) Potter, Phoenix, Ariz. There was nothing that gave Rod more joy than doting on his four brilliant and talented grandchildren: Matilda Stillson; and Cooper Stillson; and Isabel Potter; and Clint Potter.

A man of many interests and talents, Rod was a business owner, van specialist and an outstanding flower grower. He was known as a skilled card player, an avid fly fisherman, an incessant tinkerer, a gearhead and a collector. His life was measured in miles as he drove across the country in his beloved vans during many road trips where he hiked mountains, enjoyed oceans, attended concerts, entertained friends, smoked cigars, listened to music and was always up for another round. His genuine, easy going nature, unending generosity, hospitality and humor drew people to him. He will be missed by many friends from east to west.

Friends may call from 3-5 p.m. Saturday, June 18, at Thompson-Lengacher and Yoder Funeral Home, Nappanee, followed by a memorial service at 5 p.m. Interment will be at the Whitehead Cemetery with military graveside services by the Nappanee American Legion Post 154.