This was the topic Jane Wear, president and chief executive officer of Cardinal Services, presented as guest speaker at the 2015-16 Kosciusko Youth Leadership Academy Graduation Wednesday evening, May 4. This was the 22nd graduation for KYLA 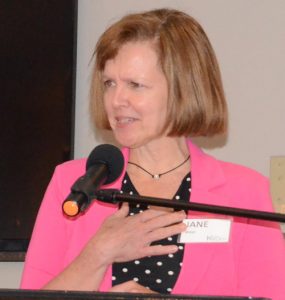 Wear picked out 10 things she believed would be of help as “you get out of high school, get to college or embark on a career. I know that you have learned many of these things already,” she said. “These will serve you well whether you are in a leadership position, a technical position or a support position.”

“Smile, smile, smile. Look for the good in people and lastly have fun. Find a job or course of study that you enjoy … enjoy the people you work with … laugh at your self when you do something dumb … laugh many times per day.

Additionally, Wear, who has been with Cardinal for 40 years, spoke about her experience with leadership. She admitted when she first came to Cardinal she was shy. “It would take me 15 minutes to get up the nerve to make a phone call to an outside vendor/employer,” she said. At that time her job was to assess the work skills of people with disabilities to determine the type of job he/she would be most successful.

When she was told she was being promoted to vocational services director and supervising her peers, “I asked him (the CEO) if I had to take the position and what would happen if things did not go well. He told me that I was being promoted and that was that. Failing was not an option.”

She stated “there are things you can control and want to do” with many doors opening unexpectedly. “You can seize the opportunity or do nothing.” 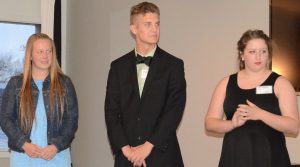 Hannah Haines, left, and Jared Mikel, were announced as the at-large KYLA board members for thee 2016-2017 year. They are shown with outgoing at-large board member Brianna Nolin

Prior to Wear’s address, two KYLA students were selected to give their Project Proud presentations. Hunter Haines and Brynn Durecki, both Warsaw Community High School participants, gave their presentations on “Designate & Dine,” and “Regeneration.” These were just two of the 23 projects created by KYLA participants, the largest number of projects for the program.

Each one presented his/her project, why it was chosen, goals, accomplishments of those goals and impact it has had on them.

The evening concluded with the presentation of diplomas to the KYLA members and the announcement of graduates Jared Mikel from Tippecanoe Valley and Hannah Haines from Wawasee High School being named as the two at-large board members for next year.

KYLA was started in 1993 with seven students. The class size has grown with up to 14 sessions during the year. Participating schools this year included Lakeland Christian Academy, Warsaw, Triton, Tippecanoe Valley and Wawasee.

Community service projects are also a part of the KYLA program. The students raised $140,000 through various projects and will donate the money to local charities.