Students and teachers from the Kehoe Kids Project pose for a group photo. (Photos by Teresa Nicodemus)

Two school buses filled with 75 fourth-graders from Milford, along with teachers and parents arrived at Riley Children’s Hospital in Indianapolis Friday, April 22. A box truck, carrying 3,000 books, which were being donated to Riley Children’s Hospital Edward A. Block Family Library, arrived as well. The books were carefully packed in individual boxes decorated by each of the children.

This day marked the culmination of a school year’s worth of hard work and commitment to a cause. Riley Children’s Hospital’s Chief Operating Officer Russ Williams and Superintendent of Public Instruction Glenda Ritz welcomed the students and celebrated their success during a dedication ceremony. Also attending the event were Wawasee School Superintendent Dr. Tom Edington, Milford Principal Cindy Kaiser and Assistant Principal Ryan Connor and members of the Kehoe family. 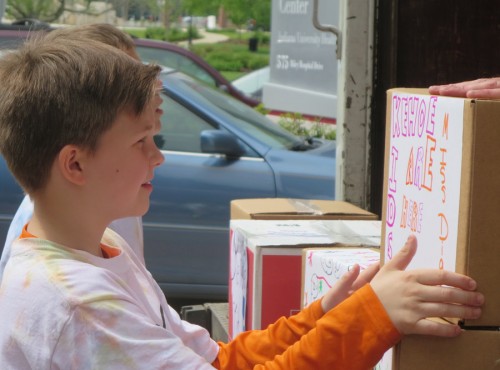 The Kehoe Kids Project is a student-led book drive honoring former Milford teacher, Diane Kehoe. The retired teacher shared her passion for reading and learning by donating books to the school’s fourth grade class. Kehoe passed away from cancer shortly after donating her books. Her legacy and the books she donated to the students inspired a movement within the school. After her passing, the class library was named “Diane’s Corner.” The fourth grade class decided to find a way to further honor their beloved teacher. The students began raising money to purchase new books for children at Riley.

What began as the students’ good-hearted idea to make a small difference in the lives of children who were sick bloomed into one of the largest, student-driven Riley Children’s Hospital projects in the state. The project started with a goal of raising $200, but the students’ determination couldn’t be contained. “The students raised money by selling snacks to other students during the school day, and since our dress code says to dress up every day, the children decided to charge $1 to anyone wearing blue jeans as a fundraiser to help pay for the Kehoe project,” explained Emily Worrell, fourth grade teacher. Local news coverage of the children’s fund-raising efforts spurred donations from around the Tri-State area. The students began thinking big. One student said, “Let’s have a thing where you sell stuff and bid on it,” remembered Worrell. One of our biggest fundraisers, added Worrell, came from the auction. “It was impressive to see 10-year-olds on the phone calling local businesses and bringing in money,” she said. “In almost 24 hours, we raised $6,000. Our final total after the auction was $13,400.”

The students dedicated the first-of-its-kind Kehoe Kart, a book cart for Riley. The Kehoe Kart will house free books for any patient or family member. The students also dedicated their purchase of a Red Riley Wagon to the hospital and presented a $2,000 check to the Riley library, along with a $1,000 check to the McKenna VanLeaken Foundation, which was formed in honor of the daughter of a Wawasee School Corporation teacher who lost her daughter to a rare liver disease. An account has been set up by the school for Kehoe Kids Project surplus money, which will enable the Kehoe Kart of books to be replenished any time books run low.

A poetry writing lesson for the students coincided with the Kehoe Kids project, said Worrell. The children published their own poetry books to dedicate to Riley and the Kehoe family. 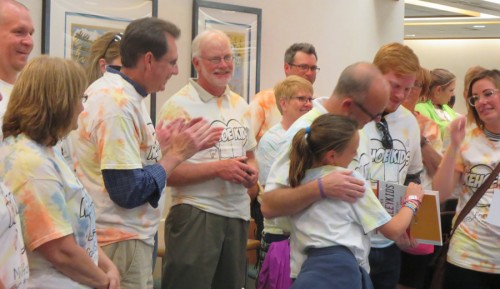 “We incorporated the idea of ‘paying it forward’ by spreading good deeds into the Kehoe Kids Project with the theme ‘Read it Forward’ where we have been able to encourage kindness through literacy,” said Worrell. “We gave 1,000 books that were donated by a local library for our program to West Noble School Corporation, a neighboring school, to enable it to create a mobile library of book boxes in places around their area, so that all children have access to books.”

When asked why she and her fellow students worked so hard on the Kehoe Kids Project for the children and families at Riley Children’s Hospital, fourth-grader Grace Triplett, explained, “We wanted to bring smiles to their faces.”

Donations to the Kehoe Kids Project can be submitted at www.gofundme.com/kehoekids. Checks can be mailed to: Kehoe Kids, Milford School, 611 W. Emiline St., Milford, IN 46542 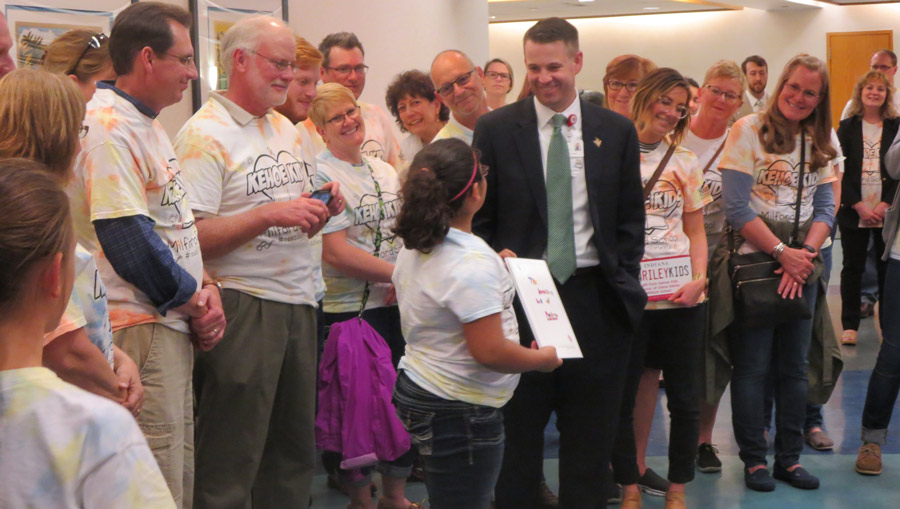 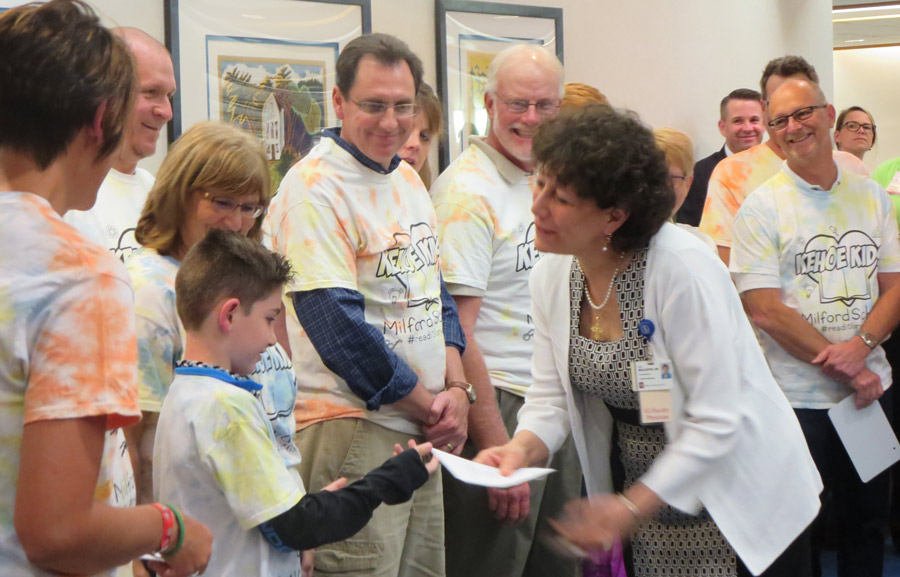 Dr. Jean Molleston accepts a check for $1,000 from Milford student Lane Iden for the McKenna VanLeaken Foundation. Dr Molleton also accepted a check for $2000 for the Riley Library from fourth-grader Kinley Stewart 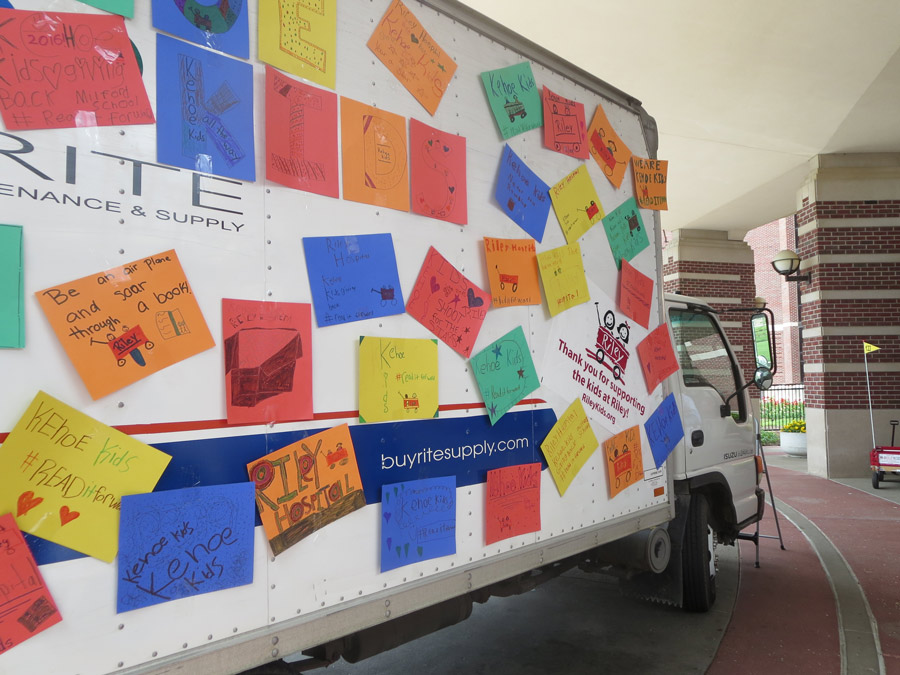 Milford students decorated the truck full of books for Riley Children’s Hospital. The truck is shown as it arrived at the hospital.