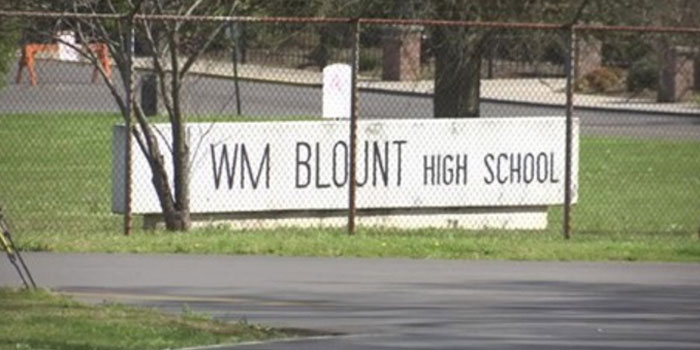 MARYVILLE, TENN. — A man was arrested after a disturbance at a Tennessee high school Tuesday, April 12, according to investigators.

Investigators said a 32-year-old man wearing only underwear and socks went into the vocational building at William Blount High School trying to pull a fire alarm off the wall because he claimed there were smurfs inside it.

The Blount County Schools system said he entered the parking lot during morning dropoff and was then seen trying to enter two outside doors unsuccessfully. They said that is when he entered the Career Technical Education wing of the school.

The school system said the secretary asked how she could help him, and he gave an incoherent response. She asked him to leave. Within four minutes the school resource officer had him in custody.

William Blount High School does not have a system that requires visitors to be buzzed into the school, but Betsy Cunningham, the Communication Coordinator with Blount County Schools said in a statement, “One of our initiatives for the upcoming year is to install a buzz-in security type program at each of our 21 schools.”

BCSO says the investigation is continuing and charges are pending again that man.

Blount County Schools provides educational excellence in a safe and secure environment which was evident earlier today in an incident which occurred at William Blount High School,” said schools spokeswoman Betsy Cunningham. “The man was never a direct threat to students, and the Sheriff’s Office is continuing its investigation.”