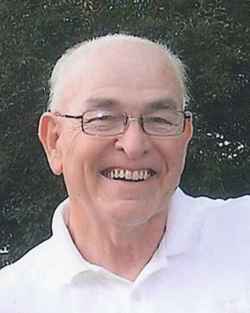 Charles J. “Chuck” Grimm, 71, Nappanee, died at 8 a.m. Monday, March 21, 2016, at his residence from complications from a lung transplant. Chucks’ testimony was his afterlife will be in Heaven and as Chuck would say he will see you later. He was born Dec. 16, 1944, on Nappanee Street in Nappanee to George Grimm Jr. and Harriett Fogel. He lived his lifetime in Nappanee. He was a 1963 graduate of Nappanee High School.

On Aug. 16, 1965, he married Carol Disher at Camp Creek Church of the Brethren. They were able to celebrate 50 great years of marriage last year because of his lung transplant. Chuck served in the United States Army from 1968 – 1970 and spent two years in Germany. He worked at NIBCO from 1963 – 2001. Retirement came at 56 so he could spend time with his family and grandkids. Following retirement, he had Antique booths in Indiana and Michigan. His private collection was a vast collection of Nappanee history. Chuck was instrumental in starting the Nappanee Center with the Nappanee Public Library, which included the Evelyn Culp Collection and served as Curator. He was also a board member of the Elkhart County Historical Society. In Nappanee, Chuck served on the Nifty Board, was a member and past president of the Nappanee Historical Society. He was the recipient of the Craftsman Award for Service to the City of Nappanee. He was also active in the Nappanee-Wakarusa Area Chamber of Commerce Golf outing.

Mr. Grimm was a member and Deacon of Camp Creek Church of the Brethren. He was very influential in starting the Nappanee Baseball Travel League and coached in the Wakarusa Little League. Chuck enjoyed golf and mentored many young golfers including his granddaughter who have been very successful in their golf games. Chuck attended every activity of his children while in school and documented in detail in scrapbooks. In sports, Chuck was always for the underdogs.

Family and friends may call from 2-8 p.m. Thursday, March 24, at Thompson-Lengacher and Yoder Funeral Home, Nappanee and for one hour prior to the funeral service which will be at 10:30 a.m. Friday, March 25, at Camp Creek Church of the Brethren. Rev. James McKibbin will officiate and burial with Military Graveside Services will be in Union Center Cemetery.

Memorial contributions may be given to Camp Creek Church of the Brethren or Riley Hospital.

Chuck was very thankful for his lung donation and would encourage all to consider being an organ donor giving the “gift of life”.