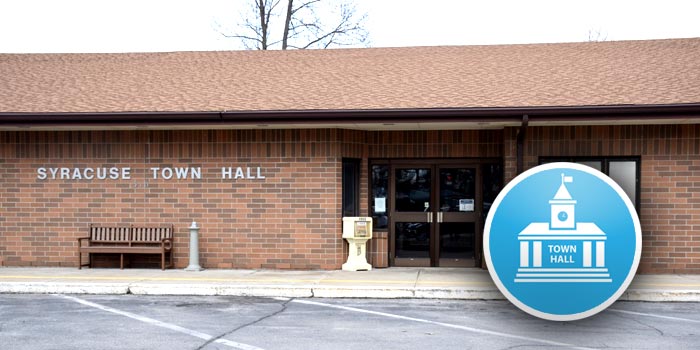 Dennis Otten, an attorney with Bose, McKinney and Evans, of which Bose Public Affairs Group is a department, explained Senate Bill 310, providing legislation to make this type of annexation easier, is on Governor Pence’s desk awaiting his signature.

The council also approved engaging Bose, McKinney and Evans in refinancing the bond for the wastewater treatment plant.

Jonathan Mullen, an engineer with Triad Associates, the company overseeing the wastewater treatment plant, brought a change order for $56,218 for a variety of items involving the project. He also requested an extension of 75 days to get the project completed.

Council Vice President Larry Siegel noted other construction projects in the area are ahead of schedule and questioned why Triad needs an extension. Robin Merchant, public works superintendent, explained issues such as the wrong size rebar and a walkway for the clarifier that didn’t fit have contributed to the delays.

Merchant also noted no one was working at the site Monday or Tuesday and there was inside work that could have been completed during rainy weather. Mullen told the council part of the issue was equipment had to be ordered with a six month lead time.

The council approved giving Triad a 34 day extension to complete the project.

The council approved an appropriation of funds to remove an unsafe building.

In department reports, Henry DeJulia, town manager, requested permission to spend $84,838 on a new salt barn. The new barn will have a fabric top and concrete walls. The new salt barn will be where the current one is located. DeJulia said he would like construction to be complete within 65 days as the first shipment of salt is due to come in July 1. Merchant told the council due to the mild winter, the new salt barn is a necessity as the new material will not fit when it arrives due to the mild winter. Council approved the request.

DeJulia provided several samples of crosswalks for Main and Dolan streets. He requested council members review them and let him know which they like best.

Police Chief Jim Layne reported the new police car is in and is being outfitted and marked.

Chad Jonsson, parks superintendent, reported the movie “Hop” will be shown Friday night, March 18. The annual Easter egg hunt for children up to fifth grade will be at 10 a.m. Saturday, March 19, and a geocache egg hunt will be held March 21-28 with various prizes offered.

Merchant reported he did several site visits of local industries and found several water meters that need to be changed since they are decades old. He also recommended the town take advantage of an economic development opportunity with Jackson Development, which is developing storage units. Merchant noted the property will need water and sewer service. Council approved working with Jackson Development.

Council member Bill Musser reported the fire territory board needs to spend up to $30,000 for new self contained breathable apparatus for the fire department. Two are 20 years old and can no longer be certified for use. Council approved the purchase.