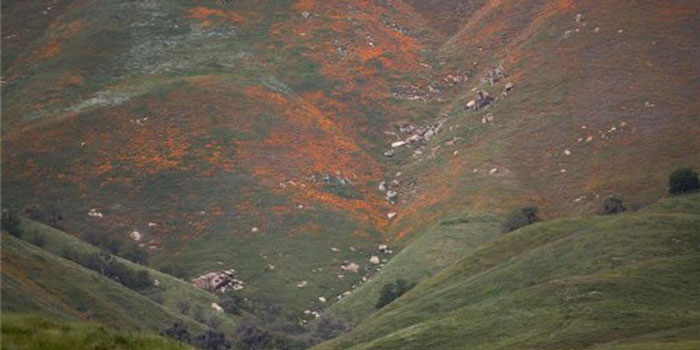 DEATH VALLEY, CALIF. — Defying its name, Death Valley is teeming with flowery abundance for the first time since 2005.

Heavy rains fell last October, stimulating dormant seeds that had been lying in the soil for a decade. Autumn and winter then brought the right amount of warmth and rain to trigger a mass sprouting of seedlings.

Death Valley is a desert and National Park straddling the U.S. states of California and Nevada. It advertises itself as “Hottest, Driest, Lowest” and is actually the place that has noted the highest recorded temperature on earth. It has held this record, a temperature of 56.7C, for 103 years.

At 100m below sea level, it is the driest desert in North America. Deserts always get a little rain and this one is no exception, managing an annual average of about 60mm. But in October 2015, flash floods were seen and two roads, damaged at that time, are still closed.

The floods were a consequence of the current major El Nino event: with the east Pacific waters warmer than normal, the weather pattern too is abnormal. This is when the desert blooms. For the past two months, the suddenly fertile ground has been colored by wildflowers.

Called a “super bloom,” this beauty of nature happens rarely. The last occurrences, in 2005 and 1998, were also due to an El Nino weather pattern.

“I never imagined that so much life could exist here in such staggering abundance and intense beauty,” said Alan Van Valkenburg, a park ranger who has lived in Death Valley for 25 years.

Currently, 20 species of wildflowers are in bloom, with the majority having short, deliberate lives. They blossom quickly and generate seeds before the dry heat stifles them once more.

The most abundant plant is the aptly named “Desert Gold,” a large, bright yellow daisy-like bloom. The stems this year are reaching waist height and the flowers cover entire hillsides and vast areas of the valley floor.

The bloom is spreading north and lifting in altitude. You would expect the spring heat to put an end to it, but, for this week at least, rain looks like a frequent visitor. That should prolong the color for a while longer.