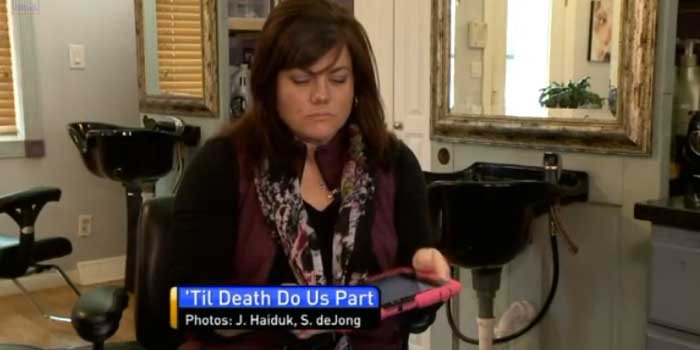 GARDNER, KAN. — What may look like just an eight-year-old iPad in a hot pink case is a whole lot more to Kerry Shields.

Because it’s an important connection to Kerry’s own mom, Donna.

“She used it to Facebook and Facetime with my 4-year-old daughter,” said Kerry.

Every day the two spoke via the iPad until Donna lost her fight with cancer in January of 2015. Days after her mom’s death, Kerry’s dad gave her the iPad, but Kerry has never been able to use it because no one knows her mom’s four-digit pass code.

“After you make so many attempts, it locks you out,” Kerry explained.

She called Apple for help. A representative on the help desk wanted proof she was the iPad’s new legal owner. Kerry sent Apple her mother’s death certificate and a notarized letter from her father saying he had given her the iPad.

“Essentially we just have to have the death certificate and a notarized letter from my dad,” she said.

But Apple wanted more — a court order deeming Kerry the legal owner. An Apple rep named Brandy was concerned about sensitive information that might be stored on the iPad. But a court order would require hiring an attorney. That’s something that would cost far more than the ancient iPad is worth.

To solve the problem, Kerry suggested Apple just wipe the iPad clean of any data. But even with no data, Apple still wanted a court order.

“I told Brandy you’ve essentially rendered this iPad useless,” said Kerry, who then asked for a supervisor. “She told me that supervisors don’t have incoming phone lines.”

Apple refused to budge and Kerry worried how she would explain that to her 4-year-old.

“She wants me to turn it on so she can talk to her grandma,” said Kerry.

Battles over a deceased loved one’s digital devices are becoming increasingly common, said probate attorney Don Quinn. He said Apple is most likely trying to protect itself should someone else come along later and claim the iPad is theirs.

Quinn said most computer companies are so reluctant to divulge passwords that he advises his clients to keep all their passwords and user names in a notebook in a safe deposit box. He also encourages them to designate the person they want to be in charge of those devices should they pass away.

A sympathetic public relations representative said the tricky part is that Kerry is not her mom’s next of kin. We pointed out that Apple had a notarized letter from Kerry’s dad (the next of kin) and had even spoken to him on the phone. Apple finally agreed it was time to give Kerry the iPad once it wiped it clean.