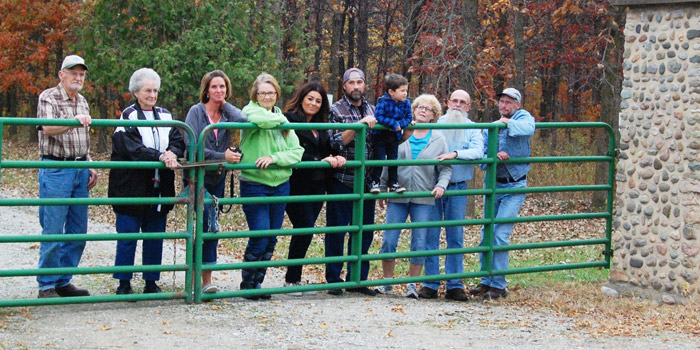 SPENCERVILLE — ACRES Land Trust has embarked on a promise to protect from development 93 acres of Claxton family legacy timber. In 40 or 50 years, this land a mile north of Spencerville, will give ACRES a gift; income from the selective harvest of more than 43,000 carefully nurtured trees.

“Trees are a natural resource we can replenish” said Bill Claxton this fall as he stood with his family among row upon row of trees he thoughtfully began planting 24 years ago. He has tended the trees through the years and will continue to care for them: pecan, catalpa, basswood, English walnut, five or six species of oak, sugar and silver maple, white and red pine. And cedar, of course, and persimmon, too. 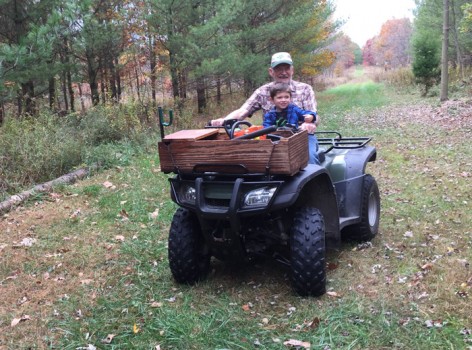 Bill Claxton and his great grandson Ian share a four-wheel ride through Claxton Woods, the property Bill has gifted to ACRES Land Trust for permanent protection.

Claxton’s dream was to harvest the lumber — “when it’s ready” — starting perhaps 40 years from now. A few years before his 1991 retirement, he began purchasing parcels of the property. “I wanted to have a plantation of trees,” he said.

Claxton, his wife Shirley, and their children and grandchildren want to ensure that Claxton Woods is not harvested or cleared irresponsibly — or too soon. They want his dream realized and the land to remain forested through the lives of his grandchildren. So they donated Claxton Woods to ACRES Land Trust.

ACRES has placed those 43,000-and-counting trees into its “Protected Lands,” promising the Claxtons and their six children, 17 grandchildren, and 18 great grandchildren that ACRES will preserve the property from development and transfer.

“ACRES’ name will always be on the deed — forever,” said Jason Kissel, executive director of ACRES. “With the ACRES’ promise, Claxton Woods’ trees will be properly harvested and a continual forest will remain.”

“My property is different from all the others ACRES has,” said Claxton. “It’s like a baby being born. I don’t think people realize how much work goes into getting the woods started here.” 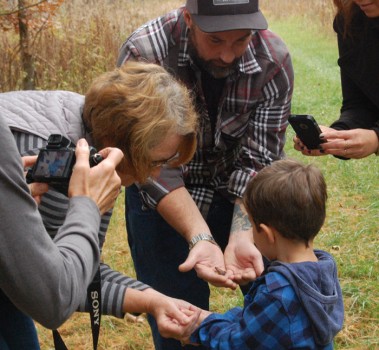 Kissel explained that “today, Claxton Woods is home to relatively same-aged trees. Over time, with careful, selective timbering as Bill intends, this woods will diversify in age. In fact, his gift will regenerate repeatedly as the income from harvesting is invested in protecting land and preserving natural areas.”

In the beginning, the dream was a field. Bill would plant and prune trees, ensuring branches did not cramp neighboring trees’ straight-up growth. An area of dead ash trees remains where they have fallen victim to the emerald ash borer. The trees are now rotting into the soil to nurture the survivors. Forestry and conservation experts mentored Bill’s decisions.

In 2013, Bill Claxton received DeKalb County’s Environmental Award from the Soil and Water Conservation District. He also was nominated for The Charles Deam Forest Stewardship award recognizing Indiana woodland owners who have demonstrated exceptional management of their woodlands.

“It’s all because of him,” Jim Claxton said of his father. “He’s taken the time to come up and prune, winter after winter. Now it’s completed. Time to let it go.”

Claxton Woods is closed to the public. 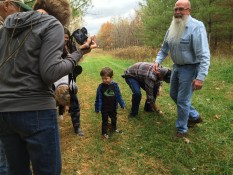 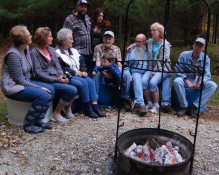 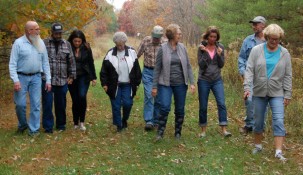