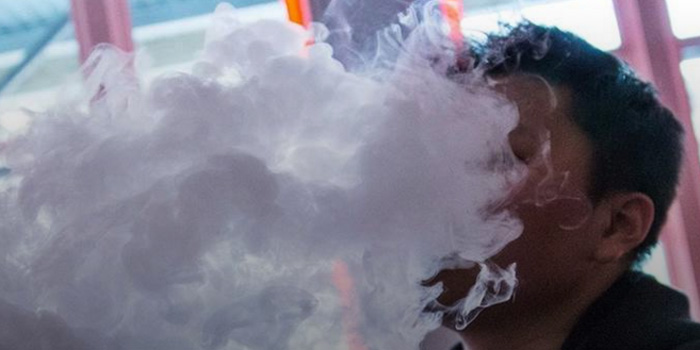 Vaping can cause lung diseases.

CAMBRIDGE, MASS. — Makers of e-cigarettes claim their products are far safer than burnt tobacco products, but a study published Tuesday, Dec. 8, shows that may not always be true.

The flavorings that make vaping so appealing are made using chemicals that can severely damage the lungs, a team at the Harvard School of Public Health found.

Most common was diacetyl, the chemical blamed for causing “Popcorn lung” in workers at microwave popcorn packaging plants.

“We selected 51 types of flavored e-cigarettes sold by leading e-cigarette brands and flavors we deemed were appealing to youth,” researcher Joseph Allen and colleagues wrote in their report, published in the journal Environmental Health Perspectives.

They also found chemicals called 2,3-pentanedione, also known as acetylpropionyl, and acetoin in many of the flavorings. The National Institute for Occupational Safety and Health has found 2,3 pentanedione can cause lung and brain damage in rats.

Diacetyl, a component of artificial butter flavoring, can cause a condition known as lymphocytic bronchiolitis, which in turn can lead to obliterative bronchiolitis — or “popcorn lung”.

It’s a rare but debilitating disease that causes vague symptoms such as cough and shortness of breath, and steadily worsens, according to the U.S. Centers for Disease Control and Prevention.

Acetoin is also used in cigarettes and it’s also linked with “popcorn lung.”

The four biggest makers of microwave popcorn have removed the chemicals from butter flavorings after the discovery that it could be causing lung problems in workers, and in at least one consumer successfully sued, saying he developed the condition after eating microwave popcorn daily.

So it’s troubling to see it in e-cigarettes, says Dr. Gina Lundberg, a heart specialist at Emory University and a spokesperson for the American Heart Association.

“Bronchiolitis obliterans is a horrible disease and nobody wants it,” said Lundberg, who was not involved in the study.

Other studies have found e-cigarettes can deliver formaldehyde and government data shows an increasing number of teenagers are checking out vaping.

“I really think it’s important to find out whether it’s safe,” said Lundberg, who added that she regularly debates with a close relative who vapes and who defends it as a safe alternative to smoking.

The Food and Drug Administration plans to regulate e-cigarettes.