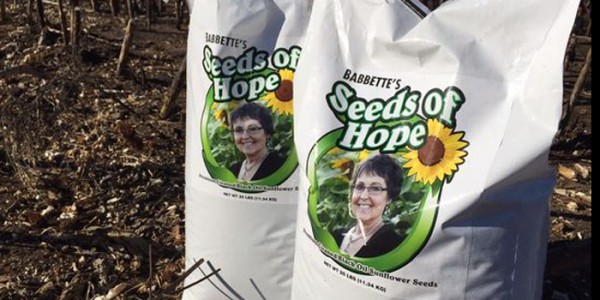 The seeds from the sunflowers that honored Babbette, are being bagged and sold for a cancer fund aimed at finding a cure. Her family has named the venture, “Babbette’s Seed of Hope.”

EAU CLAIR, WIS. — No one puts October sunflowers on postcards. The same flowers that glowed in summer, are sad and broken by fall — their best days behind them. At times the past year, Don Jaquish could relate.

“Pretty heavy,” says the farmer from the cab of his combine, harvesting the dried and lifeless sunflowers he planted in the spring. For a few spectacular days in August, those same flowers were Jaquish’s gift to his wife Babbette — and to the world.

“She’s always loved flowers, but sunflowers were her favorite,” the farmer says.

Jaquish knew that, and now everyone else does too, thanks to the 4 1/2 mile ribbon of sunflowers he planted along both sides of Wisconsin SR 85. The flowers — and the viral news stories that followed — had a reach Jaquish could never have imagined.

“We’ve gotten emails from all over the world,” he says. “It went way beyond everything we ever dreamed about.”

And then, like Hollywood’s Field of Dreams, the cars started arriving.

“The driveways were lined, the highways were lined,” says Babbette’s daughter, Jenny White. “And then I thought to myself, ‘Oh my gosh, they’re going to die.'”

The circle of life can be cruel sometimes. The dried up flowers and Babbette’s empty seat in the combine next to Jaquish are both fall reminders that the woman they love is still gone.

“It’s hard this year,” Jaquish agrees, as he steers his combine through the sunflowers.

How nice it would be if flowers could provide a permanent ray of sunshine. But Babbette’s entire family knows, that’s not the way life works.

Jaquish still sheds tears of his own.

“The part I miss the most is just holding her hand,” he says, his voice cracking.

With no comfort left in the flowers Babbette’s family has shifted its focus to the seeds. The seeds from the sunflowers that honored Babbette, are being bagged and sold for a cancer fund aimed at finding a cure. Her family has named the venture, “Babbette’s Seed of Hope.”

“I think that hope lives on,” says White.

Kept awake by the chemotherapy drugs, Babbette passed the hours by writing notes to her family. One in particular seems fitting for Thanksgiving. Jaquish reads it aloud from the seat of his combine.

“Pray that you get to spend one more day with your family and friends,” Babbette wrote. “There is no guarantee we will get to see the sunrise tomorrow.”

Millions of people saw Babbette’s sunflowers — in person, online and on local and network news.

Erin Renz, Babbette’s daughter, is certain why the tale of the sunflowers captivated so many people.

“It’s a love story,” she says. “Don loved my mom, my mom loved her family, and who doesn’t love a love story?”

The seeds Jaquish planted with love are being harvested with healing.

“This will be the last day of combining flowers for the year and life’s been good,” he says.