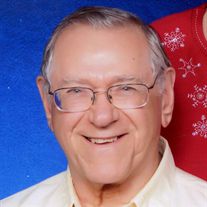 Donald was a press assembler, a member of New Paris Missionary Church and a member of the Envois Quartet since 1993.

Visitation will be 2-4 p.m. and 6-8 p.m. Tuesday, Nov. 17, and one hour prior to the 10 a.m. service Wednesday, Nov. 18, all at Rieth-Rohrer-Ehret Funeral Home, Goshen. Pastor Dave Hackney, Pastor Matt Schoettle and Pastor Jeremiah Thompson will officiate. Burial will be in Violett Cemetery.

Memorials may be directed to IU Health Goshen Hospice.