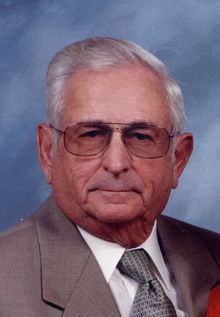 Louis served in the U.S. Army during WW II and was discharged in 1947. He worked for Thermogas, New Paris and retired in 1992 after 42 years. He was a member of the Grace United Methodist Church, New Paris, a committee member of Boy Scouts Troop #12, New Paris, member of the VFW Goshen Post #985, served on the Jackson Township Improvement Corp. Board and was a past member of the New Paris Lions Club.

Visitation will be from 2-4 p.m. and from 6-8 p.m. Wednesday, Aug. 26, and one hour prior to the 11 a.m. service Thursday, Aug. 27, all at Rieth-Rohrer-Ehret Funeral Home, Goshen. Rev. Bob Doane will officiate and burial will be in the New Paris Cemetery.

Memorials may be directed to the Grace United Methodist Church or Boy Scout Troop #12, New Paris.