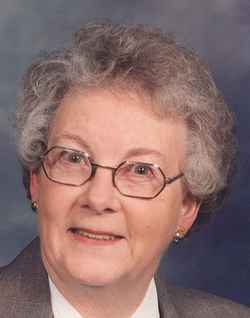 She was born Jan. 1, 1927, in Bremen to Arthur and Helen (Wells) Heckaman. She was a lifetime area resident. She worked at Ball Band in Mishawaka, and was a sewer for Phoenix, Franklin Coach, and Leisure Time in Nappanee, and had worked as a cafeteria worker at Central School. She was a member of the Nappanee United Methodist Church, a former member of the Kosciusko County Extension Cable Stitch Club. She was a farmer’s wife, a great cook, and enjoyed her flowers. In her later years, she enjoyed traveling. Mardell loved children and working with children very much. She married Dale Berger on March 19, 1950, in Nappanee and he preceded in death on Oct. 20, 1993.

Visitation will be from 4 p.m. to 8 p.m. Friday, Aug. 7, at Thompson-Lengacher and Yoder Funeral Home, Nappanee, and for one hour prior to the 10:30 a.m. Saturday, Aug. 8, service, also at the funeral home. Rev. Jim Davidson will officiate, and burial will follow at Bremen Cemetery.

Memorial contributions may be given to the Elkhart County Hospice, Nappanee United Methodist Church, or to the Alzheimer’s Association.