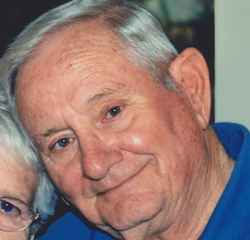 He was born on Jan. 18, 1929, in Goshen, to Floyd and Goldie (Miller) Weaver. He was a lifetime area resident. Dale worked as a wood worker for Mutschler’s Kitchen, and then Nappanee Wood. Dale enjoyed traveling, woodworking, and going to Lakeland, Fla. in the winters with his wife. He married Rosalie Robison on Aug. 25, 1946, and she preceded him in death on Oct. 12, 2009.

Visitation will be from 2 p.m. until 4 p.m. and from 6 p.m. to 8 p.m. Friday, July 31, at Thompson-Lengacher and Yoder Funeral Home, Nappanee, and for an hour prior to the 10 a.m. funeral service on Saturday, Aug. 1, also at the funeral home. Pastor Terry Tyler will officiate. Burial will follow at Union Center Cemetery.

Memorial contributions may be given to the American Cancer Society and Elkhart County Hospice.