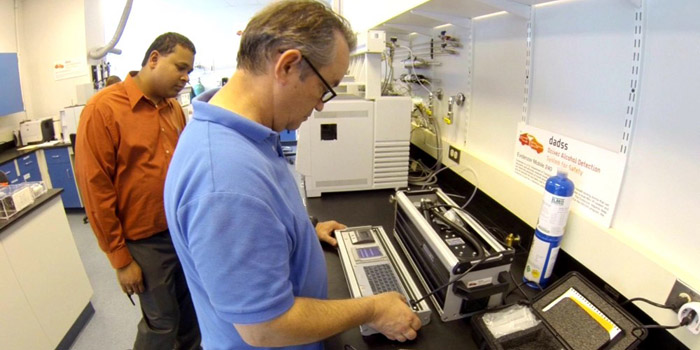 Researchers are diligently working on a new technology that will enable cars to detect if the driver is drunk before starting the vehicle. The technology is called the Driver Alcohol Detection System for Safety – or DADSS – and is being developed in a laboratory outside Boston using government funding.

Bud Zaouk, project manager for the DADSS program at tech company QinetiQ North America, stated that there are currently two different types of alcohol detection systems that are being developed.

One captures a driver’s breath and pulls it into a sensor, where a beam of infrared light then calculates the driver’s blood alcohol concentration (BAC). The sensor could be built into a vehicle’s dashboard, ceiling or seat belt.

The second technology uses a touch-based system integrated into a car’s ignition button or gear shift. It uses tiny lasers to shine a special light onto the driver’s finger, reading the alcohol level below the skin’s surface.

Project engineers say that unlike an ignition interlock system, which requires a convicted drunk driver to manually blow into a sensor and then wait for results to start a vehicle, the DADSS system would be designed to be passive, hidden and nearly instantaneous when a driver gets into a car.

“The challenge that we have is to measure alcohol content or blood alcohol concentration very accurately, very precisely and very fast,” explained Zaouk. “Our goal is less than half a second, 325 milliseconds to be specific. We do not want to inconvenience the driver.”

The project has a lot of support from automakers, federal lawmakers, the National Highway Transportation Safety Administration, Mothers Against Drunk Driving, AAA and major insurance companies. Currently the plan is to make the technology an option on new vehicles, giving consumers the choice as to whether or not they wish to utilize it.

There are critics, as well, including the American Beverage Institute, which has made several statements about the technology. Their concern is that consumers who drink responsibly may be impacted unfairly.

The technology has come a long way, but is still just in the prototype stages. Zaouk hopes to begin road testing a vehicle equipped with DADSS sometime next year, but a commercial version likely wouldn’t be available before 2020.

“It’s no longer a question of ‘Can we do this?’” said Zaouk. “We all know we can do it. It’s just a matter of time and effort to get it into a vehicle. I have three little kids. For me, personally, I want to see this system in vehicles before my kids start driving.”