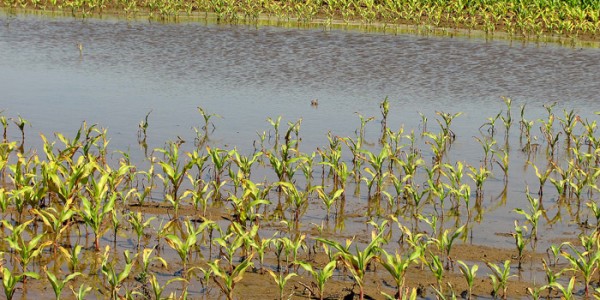 Heavy rains and flooding have destroyed as much as five percent of Indiana’s corn and soybean crops, potentially causing approximately $300 million in damage this month according to experts.

“We went from a well above-normal crop to a very discouraging, below-normal crop,” stated Chris Hurt, Purdue Extension economist. “This was a very devastating period.”

Losses are expected to continue to mount, as more rain is in the forecast over the next few weeks.

Hurt said that grain prices have already started to increase as the extent of crop damage becomes apparent. Higher prices could be offset by reduced yields, however, as well as increased expenses from replanting flood-damaged fields.

Nearly 80 percent of the state’s corn and soybean acreage was covered by crop insurance, according to Michael Langemeier, an agricultural economist specializing in crop systems. He stated that it is too late to consider replanting corn, but soybean farmers could decide to start over. They would need to do a cost-benefit analysis first, however.

“The main things farmers need to consider is what additional expenses they will incur and compare that to the additional revenue,” said Langemeier.

Indiana has not applied for federal disaster assistance in relation to the flooding.

“We certainly know that our farmers across Indiana are experiencing unprecedented rainfall,” said Julia Wickard, state executive director of the Farm Service Agency. “These flood events have left damage and heartbreak behind.”

FSA officials are collecting data and assessing damage in the hardest-hit regions of the state. To qualify for disaster assistance, a region has to show at least a 30 percent loss in production.