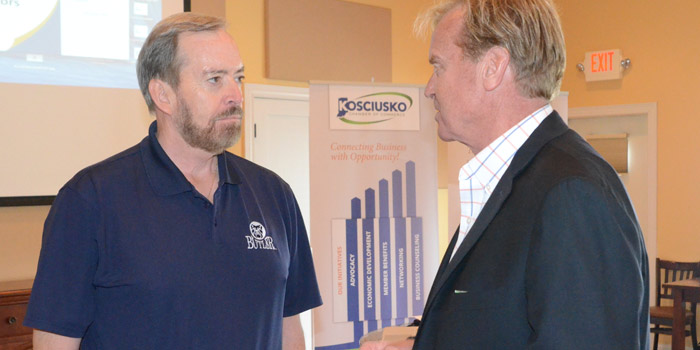 Vince Griffin, vice president of energy and environmental policy for the Indiana Chamber of Commerce, speaks with Kip Tom regarding water and energy during a resource luncheon Friday.

“When you go home tonight, I guarantee you, there are three things you will do: flip a switch, turn on the tap and flush,” stated Vince Griffin, vice president energy and environmental policy for the Indiana Chamber of Commerce. He spoke about water and energy resources during a luncheon today, Friday, June 19, hosted by the Kosciusko Chamber of Commerce.

Griffin stressed to keep, grow and attract businesses in Indiana, water is essential. This area, according to Griffin, is the richest water area in the state and nation. “Water is so critical just to life, not to mention economic development … we see this as a real attractor to bring business and industry here,” Griffin said.

“We think people are going to start to come back to the Great Lakes area. We’re starting to see that now, going forward and what we see happening in California now,” stated Griffin. 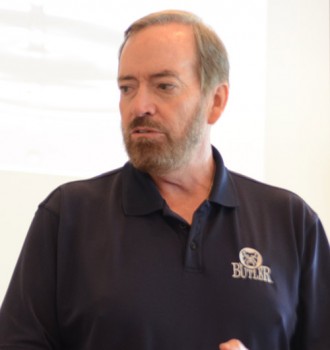 He presented a look at the world water supply where only 3 percent is fresh water, the remainder is ocean and undrinkable. Of that 3 percent, 68.7 percent is in icecaps and glacers, 30.1 percent ground water and .9 percent other with .3 percent being surface water. Breaking down the surface water shows 87 percent are lakes, 11 percent swamps and 2 percent rivers.

Griffin also presented information in regards to the Great Lakes region, where 20 percent of the world’s fresh water is contained. Indiana has the smallest part in the Great Lakes basin but is second in water usage due to manufacturing. Additionally he pointed out a Great Lakes Compact was signed in 2001, that “not one drop of water can be diverted from the Great Lakes unless all states and provinces (those that boarder the great lakes) agree. The water is highly protected.”

In contrast Central and Southern Indiana are limited in their water supplies. “You folks are so lucky up here to have water.”

Because the state is a very energy intense state, a four-prong effort is occurring regarding water, including regulatory efforts and creating a plan to provide a level of certainty for companies coming to Indiana. He referred to recent legislation setting up volunteer water data retrieval for quality control, monitoring ground water, which will be reported to the DNR and available through the United States Geology Service.

Kip Tom stated a number of producers have formed a network, hired a hydrologist to provide information on the impact irrigation has on the water supply.

Switching to energy, Griffin spoke of the production of energy with China and India the highest producers, the change from coal production to natural gas due to the cost, the 52 new federal EPA implementation plans and new ozone standards plus the closing of nuclear power plants due to operation costs.

He noted the need and use of energy will increase. “I’m concerned there will be such a noose dive we can’t come back up. I don’t know where we will get enough electrons to light everything.” He added low and middle income families will be impacted the most. “Will it be medication or heating/cooling the house.”

Alternative sources were noted: wind turbines (costing $2 million per tower but can only be placed in areas where there is a lot of wind), solar energy, geothermal and small modular nuclear reactors like those used in air crafts and submarines.

Concluding, Griffin stated no one has ever paid for water (the cost has been for plants, pumps, etc.) but he believes that will change.