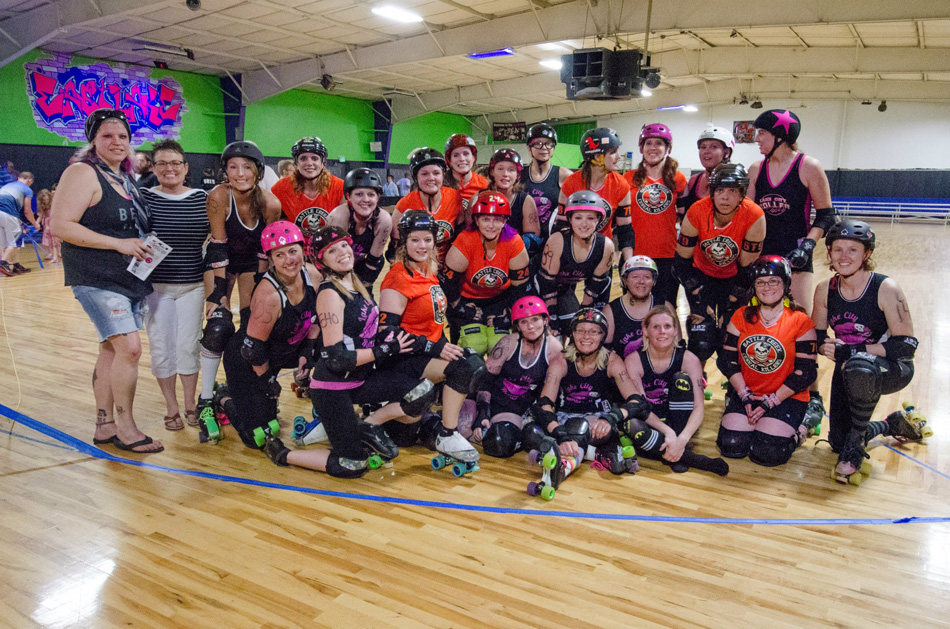 The Lake City Roller Dolls beat the Battle Creek Cereal Killers 183-150 Saturday at the Dollhouse in Warsaw. Both teams came together for a combined group photo following the bout. (Photos courtesy of Andy Kerr)

WARSAW – Lake City wasn’t about to find itself all wet Saturday night in its home bout with Battle Creek. The Roller Dolls held court at the Dollhouse and defeated the Cereal Killers 183-150.

Trailing at the break by 40 points, Lake City emerged the more fit team in the second half and rallied for the victory. The Dolls made their move in the second half on the strength of a 25-point power jam from Legs Fordays as well as quality jams from Buckwyld Barbie and Fordays through the half.

Building up a lead at the six-minute mark, key blocks and the endurance kicked in as Lake City rolled to the 33-point victory.

Barbie was named the MVP jammer of the bout and Spiteful was tabbed the MVP blocker for the Roller Dolls.

“Many of the first-time fans and regulars came to me and said it was one of the best night they have ever been a part of,” boasted Roller Doll head coach Dyrtie Gyrtie. “Great bout. We came from behind and took over the second half. Endurance won the bout.”

The bout was dubbed “Treasures For Troops”, with proceeds from the bout geared for donation to military families in the community.

Lake City will be in Fishers this Saturday, June 13, for a roadie at Terrorz of Tiny Town. The team will scrimmage at the Mermaid Festival in North Webster June 27 and again at Cromwell Days July 18. The team will then have home-and-homes with the South Shore Roller Girls in Hammond August 22 and in Warsaw September 12. 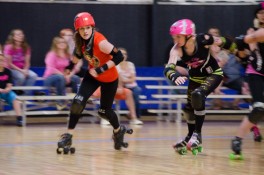 Jenn-N-Jukes and her daughter, Karlie, celebrate a victory over Battle Creek. 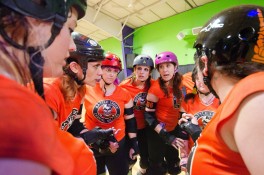