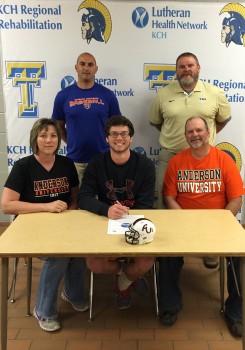 Triton High School senior Grant Stichter has signed a letter of intent to continue his football career at Anderson University. Seated with Grant are parents Evelyn and Tim Stichter. In the back row are Rodney Younis and Triton football head coach John Johns. (Photo provided by Triton Athletics)

Grant is the son of Tim and Evelyn Stichter. He plans to major in Business while playing football at Anderson.