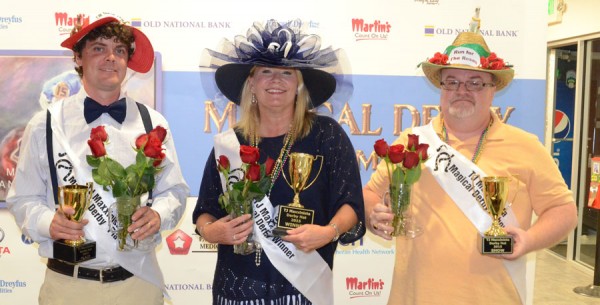 “A night at the races” was the theme for Saturday’s The Magical Derby supporting Magical Meadows Therapeutic Horseback Riding.

With tables decorated with sun hats adorned with flowers or derby boxes, approximately 150 persons filled the showroom at Toyota of Warsaw to enjoy “The Magical Derby.”

The evening centered around “The Magical Derby” a local version of the day’s earlier Kentucky Derby, it was also an opportunity to share information about Magical Meadows. 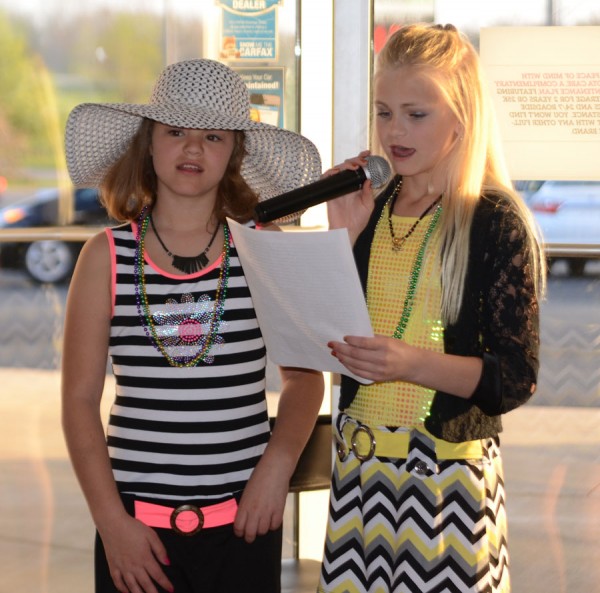 Lizzy Rice listens to what her sister Christina has to say about Magical Meadows and growing up around those with special needs.

Christina Rice read a speech about her experience with those having special needs and the experience she has had at Magical Meadows. “I  have been around someone with special needs all my life,” she stated. She continued by noting those with special needs can do more than what people think, relating some of the things her friends and her sister, Lizzy, can do: knee board, participate in cheer teams, run track, play volleyball, swim. She stated her sister can “swim like a fish,” and loves to sing and dance.

Rice spoke of the pairs experience at Magical Meadows, the horses they have come to love, how the facility took on its name.

Tina Rice, event chairwoman, stated she was “beyond words” to the loyal and returning derby guests.

Magical Meadows operator, Tammy Stackhouse, shared how the center began, the services it provides to 80 kids throughout the year and over 100 during the summer alone. She spoke of the accomplishments of those participating in the center and a new need and opportunity, which will soon begin – “Warriors Mount Up” for those who have served in the military.

Ted Grubbs listens to fellow serviceman Jesse Hoffman talk about the plight of returning servicemen and the need for therapeutic programs.

Capt. Jesse Hoffman and Ted Grubbs, local veterans, shared what such a program could do for veterans. Hoffman spoke of struggles with stress, the invisible walls veterans have built, the things they have seen and done they cannot explain to any one other than those who have been through it. “This (the new program) will bring soldiers together, reuniting the brotherhood. They were all there, there is a sacred bond and it gets them to open up … They need to be in an organization with those who shared the same things.”

Grubbs, who participated in a therapeutic horseback riding program in Colorado, is pleased such a program is starting locally. “All they need is someone to listen,” he said, reiterating the fact there are 22 veterans committing suicide daily.

Guests had opportunities to bid on 19 silent auction items and a chance to win a large number of prizes in the “winner circle” through a drawing.

Highlighting the evening was placing ticket bets on 10, 10-horse races, with the winners receiving more tickets to put in product drawings. Even the “loosers” of the races had opportunity to become winners by placing betting tickets in drawings for various prizes. Opportunities to purchase horses in each race to receive a trophy and prizes if a winner and a bonus race where 10 horses were auctioned off to the highest bidder. The winner received half the auction proceeds. However, the winner gave his half of the $760 back to the Magical Meadows.

There were other contests, where winners received one-half the pot. In one contest, which generated $700, the winner “gave it back” to Magical Meadows.

Magical Meadows also received a donation of close to $1,000 from DePuy, which held a three-hour fundraiser, hosted by the ADL committee.

The totals are still being tabulated from the evening. Other fundraising opportunities were also noted, such as becoming a matching donor, or test driving a vehicle in July.

Ashley Wentz opted for a colorful spring hat with a butterfly as her derby hat.

Wende Tucker is ready for the derby

Kim Finch shows off her hat for the derby. 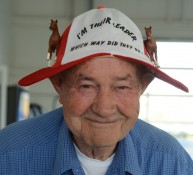 Ed Klug, while the leader, isn’t sure which way the horses went. 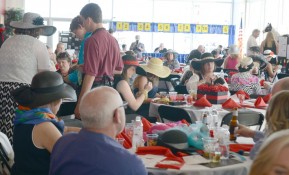 Hats in all different styles and colors were worn at The Magical Derby Saturday evening. 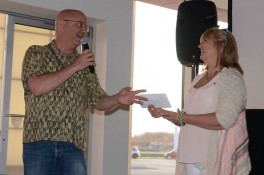 Tom Wogomon from DePuy hands Tammy Stackhouse a donation of over $900, employees of the company raised during a derby contest. 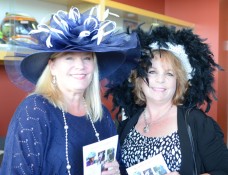 Kevin Moist created a special hat for the evening. 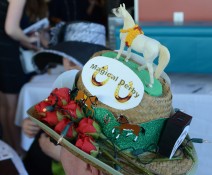 This ordinary straw hat was decorated with roses, lights and horses for the evening. It was chosen as third place winner in the derby hat contest. 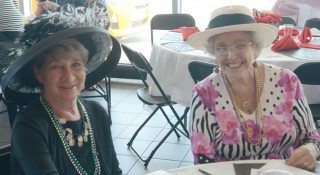 Carol Watkins and Mary Ellen Rice dress for the occasion. 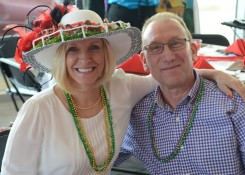 Dawn Pickens, shown with Kyle Trick, wore a unique hat for the evening.