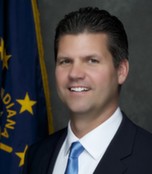 Sen. Ryan Mishler has announced the passage of a new state budget that provides significant funding increases for K-12 education.

The Indiana budget passed by the Indiana General Assembly is honestly balanced, focused on funding Indiana’s most important needs and creating a strong foundation for our economic future. The two-year budget plan provides increased funding to K-12 and higher education, roads and infrastructure and public safety.

“This is a budget that will benefit all Hoosiers and focuses on education funding,” Mishler said. “It is balanced and allocates money to the areas of greatest need such as our classrooms, both K-12 and higher education, while maintaining reserves that protect Indiana taxpayers.”

Highlights of the budget include:

Mishler also authored Senate Enrolled Act 566 to reward Indiana’s best teachers. This bill would shift additional education dollars toward the classroom instead of overhead by increasing pay for effective teachers.

The Senate is now adjourned “sine die” which signifies the end of the 2015 Indiana General Assembly.