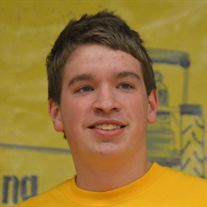 Kurt was a Tippecanoe Valley High School Junior. He was very active in the First Baptist Church of Warsaw and had planned to play for the softball team and be a leader in children’s church. He was a Junior firefighter on the Burket Volunteer Fire Dept. He was involved in the Tippecanoe Valley FFA for three years and was a nine year member of Beaver Dam 4-H Club where he was vice president this year. He showed Dairy Calf Feeder Steer for all nine years as well as American Heritage Project and Farm Toy Scene. He loved Tippecanoe Valley Sports, the TV shows McHale’s Navy and the Dukes of Hazard, John Deere equipment, anything Ford, Notre Dame Football, New York Giants, Indianapolis Colts and Peyton Manning as well as Andrew Luck. He always had a smile on his face and enjoyed life. He accepted Jesus Christ into his heart last September.

In his memory, donations can be made to the Kurt Miller 4-H Scholarship and may be made payable to the Beaver Dam 4-H Club